The conference was filled with optimism and an emphasis on international standards, but far too much was left up in the air.

Responsible business conduct and climate action for net zero commitments. A wordy way of asking, what are corporations — who are responsible for the majority of harmful emissions — going to do about climate change? Whatever they want, apparently.

Laura Mora — Coordinator for the carbon neutral country programme in the directorate of climate change for the government of Costa Rica.

To say that corporations will be given free-reign to tackle climate change in whichever way they feel like would be an exaggeration, but honestly, not as much of one as you may think. Each panelist spoke extensively on the importance of standards and guidelines, and how essential it is for there to be internationally agreed upon guidance on how businesses should tackle climate change. Genuine regulations were stressed as more essential than voluntary standards, and this was a positive sign. So too was the admonishment of corporate green-washing, and the desire to see targets translated to solid action. But all in all, these glimmers of hope were washed out by a constant underlying acceptance that in terms of climate action, companies still hold all the cards.

Perhaps the most grating refrain during the event was the optimistic declaration that, 'isn't this a nice problem to have? We're arguing about how to reach net-zero, rather than arguing if we should.' This self-congratulatory rhetoric does nothing for climate action. It is not a "nice problem to have". Climate change has been part of the national consciousness for many decades, and the inaction of companies will likely have devastating effects on humanity. It is very poor taste to boast about deciding to act now, in what many consider to be the eleventh hour.

I think the biggest issue comes from the fact that it was clear to me that every speaker in the room firmly believed that climate action must be profitable. This is unsurprising. A corporation exists for profit, this has always been the case. A company will almost only ever make a positive social decision if the market backs that decision up. If destroying the planet lines the pockets of the stakeholders, then let the world burn. Hearing the host comment that it's necessary to make companies aware that the adverse effects of climate change will have an impact on their profits felt like a subtle statement on the absolute amorality of these organisations. Yes, climate change will impact their profits. It will also, if left unchecked, lead to countless deaths and ecological catastrophe. Maybe it's naive of me to expect morality to be a factor, but surely these stakeholders and board members have at least some concern for the future?

Scott Steedman had the most to say overall, some of which was welcome. His clear expertise in the role of international standards provided a lot of much-needed clarity on the effectiveness of organisations like the OECD Centre for Responsible Business. But some of his opinions did not sit well with me. He stressed the importance of balancing scientific advice with profitable business/economic goals, going so far as to denounce the role of experts: "We cannot do this by having experts tell us what to do. You go out on the street and they'll tell you they don't want that." He went on to say that titles like "expert" do nothing but frustrate people, implying one person's opinion is more valuable than another's. As someone with very little scientific knowledge, I know for certain my opinion is less valuable than an expert on climate change; I'd much rather they drive policy than anyone else – especially not someone who is incentivised to continue damaging the climate for profit.

Stephanie Pfiefer's statement on the flexibility of standards, whilst positive in terms of the need to tailor standards to a country's economic state, was used by Steedmen to stress how much control stakeholders will have over the regulations the companies they are concerned with must adhere to. He stated: "Standards are dynamic, we will change them whenever stakeholders want to." Given the variety of stakeholder desires, this willingness to allow the fluctuation of standards does not bode well.

Overall I felt it was far more important to listen to the content of the discussion, rather than the cloying optimism. So long as there's this perception of the need to convince companies that green policies will benefit them, not much is going to change. Regulations are essential, but they must be metered carefully with expert opinions on what will actually work. Corporations will not provide the solution to a problem they caused. 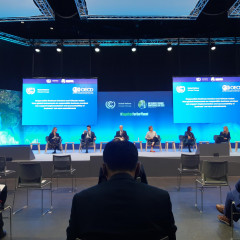 Opinion: Thoughts on the COP26 talk on corporate climate action

The conference was filled with optimism and an emphasis on international standards, but far too much was left up in the air.