Film has a race problem and my favourite genre - horror - is no exception. In fact, it is arguably one of the worst for it in many ways. From the overwhelming whiteness associated with goth aesthetics to the ‘black guy dies first’ trope in horror fiction to the appropriation of African and Indigenous religion and spiritual practices, racism in horror didn’t die with H.P. Lovecraft’s cat (who - for those who don’t know - was named after an incredibly racist slur).

Even beyond that, the work done by people of colour in any genre is frequently under-acknowledged and undervalued. Media favoring white creators is a tale as old as the media itself. In the twenty-first century, we’ve been confronted with this bias over and over again. From Kanye West interrupting Taylor Swift to assert that Beyoncé had been robbed of the Female Music Video Award at the 2009 MTV Awards to the 2016 trending hashtag #OscarsSoWhite to The Weeknd being snubbed at the 2021 Grammys despite his massive and record-breaking chart successes, the pattern is clear across all forms of entertainment. Again and again, creators of colour don’t receive the recognition that they deserve.

But the real reason to watch horror made by directors of colour is not from white guilt or attempt at balancing the scales. No. The best reason to watch their work is because it’s really bloody good. These five directors of colour are doing some truly amazing work and that deserves to be celebrated. And though some of these directors have managed to gain huge commercial success, there is no harm in further emphasising how diverse voices specifically make horror better.

Malaysian-born Australian director, screenwriter and producer James Wan might truly be the king of twenty-first century horror. Saw, Insidious, and the Conjuring are some of the main staples of modern horror, and Wan is the creator or co-creator of all three. While he is seemingly no longer involved with Saw, he remains involved in the production of the latter two franchises. It seems almost ridiculous to describe any of those franchises, since they’re so well-known that even if you haven’t seen them, you likely have a passing familiarity with the premises, so instead let’s talk about his upcoming work.

His latest film, Malignant, is a new release this month and represents an exciting change in direction for Wan’s horror portfolio. While most of his recent work has been set in his pre-existing cinematic universes, Malignant is an entirely new horror/thriller which follows Madison, a young woman who is tormented by visions of brutal murders which turn out to be all too real. The twists and turns are unpredictable without seeming to come out of nowhere and the spook factor does not rely solely on jumpscares, which is a huge bonus for me. The word ‘atmospheric’ is used a lot to talk about horror movies, but the visuals which Wan creates are really the starring role in this film. Madison’s vision sequences are shot in an incredibly interesting way, creating a greater sense of terror than if we were simply shown each murder from the usual camera’s eye perspective.

This list simply wouldn’t be complete without mentioning Jordan Peele, who skyrocketed to enormous international fame in the horror scene with the release of his 2017 film Get Out. Peele had already gained a following through his work as one half of the comedy duo Key & Peele, but his move from shorter sketch comedy to long-form horror content (albeit with some elements of comedy interspersed at just the right moments) is one that makes full use of his talents.

Both Get Out (2017) and Us (2019) have star-studded casts and explore themes of bodies and identities - particularly those of Black Americans - and like the best kinds of horror, refuse to fall back on jumpscares alone. Get Out follows a Black man’s discovery of the shocking, twisted secrets kept by his white girlfriend’s family, while Us is the story of vengeful doppelgängers terrorising a family. Though neither plot line is absolutely possible in our real world, the issues of bodily autonomy, racism, oppression, and what makes us who we are come just close enough to produce an almost uncanny valley-esque reaction. There are jumpscares, yes, but there is also the steadily growing unease and the concepts which remain horrifying, even once the initial shock has worn off. Peele's work is horror for your brain, not just your nerves, and his style pulls absolutely no punches.

Not much is known right now about Peele’s next venture as a director, other than a scheduled release date of July 2022 and that Daniel Kaluuya - who played Chris, the protagonist of Peele’s Get Out (2017) - will be starring alongside Keke Palmer and Steven Yuen. At this point, all I need to know is that Peele is both the writer and director: I’m already sold based on that alone.

I stumbled across Remi Weekes’ work almost by accident as I flicked through my Netflix recommendations. His 2020 debut His House is an incredible take on the haunted house genre, telling the story of Rial and Bol, a refugee couple from South Sudan, who find themselves trapped in a house with a sinister force and no other housing options as they attempt to seek asylum in the UK. The process and conditions for asylum seekers are a horror in their own right, but Weekes compounds this with a supernatural element that makes the psychological horror all the more intense.

His portrayal of the conditions and helplessness facing refugees is a central part of the film in that it answers the question ‘why would anyone stay in a haunted house?’, but more than that, His House is about personal demons. It’s about guilt, it’s about assimilation and identity, and it’s about fighting for survival. I thoroughly appreciate the complexity of his protagonists and the inclusion of folklore that is entirely unfamiliar to me, particularly given how saturated with the same tropes and boogeymen the world of English-language supernatural horror can be (side note: this film is also not solely English-language - Rial and Bol speak occasionally in their native Dinka language, which is translated via subtitles for those of us who don’t speak it). Even the jumpscares managed to be more than a quick shock, and the way that the whole film is shot gives a very intimate feel, with muted moments contrasting wonderfully with the more extreme.

His House was nominated for three BAFTAs and won four British Independent Film Awards, so I can only hope Weekes will continue to work in horror and would undoubtedly pin him as a rising star in the genre. Remi, if you’re reading this, please give us more!

Like Weekes, Chaganty’s creation is another gem from my Netflix algorithm. His film Run (2020) is technically more of a psychological thriller than true horror, but it was twisted enough and contained enough conventions of the horror genre that I feel justified in including it. Plus Netflix puts it in the horror section too, so don’t come for me.

Run is a story about Chloe, a young disabled woman who is cared for by her mother and who lives her life in relative isolation. In a welcome but still sadly uncommon move, Chloe is played by Kiera Allen, who also uses a wheelchair. Like with race, the horror genre has a long legacy of problematic content related to disability, particularly in the trope of bodies outside of our expected norms being seen as in and of themselves horrifying. Chaganty proves that you don’t need to do that to create a story that is still deeply unsettling.

While there are still a few, this film is not so big on the jumpscares. It is more focused on the steadily building psychological horror and the unbearable sense that something is wrong, that those who we think we know might not be all that they seem. This, to me, makes it all the scarier.

Chaganty is currently working on a sequel to Searching, his first film (which is definitely firmly in the thriller category) which relied solely on the medium of smartphones and tablets to tell the story of a father’s search for his missing daughter. It’s not clear where he’s going to go with this, but that lack of predictability makes for some intriguing storytelling potentials. Personally though, I hope he will also put his talents towards more out-and-out horror in the future too.

The horror scene has not just been overwhelmingly white, but also overwhelmingly male. Nia DaCosta is the only woman of colour whose work in the field is getting mainstream attention, which says as much about misogyny and racism in film as it does about just how talented she is to be able to beat those odds.

DaCosta’s Candyman is a sequel to the original 1992 film of the same name, but in my opinion, her version is much more ambitious. It has not only all the necessary elements of a supernatural slasher but also contains complex and not too heavy-handed commentary on millennials, gentrification, art, race, and community. The build-up is the perfect speed; DaCosta doesn’t jump straight into the action but I didn’t feel in the slightest bit impatient as she built up the world and characters. I won’t spoil the ending, but it felt like the best kind of end for a good horror film.

I would say that it’s better than the original Candyman film and I can’t wait to see what DaCosta does next. I’d be especially interested in seeing her take on some new IP, so fingers crossed that she has some in her future! However, having just signed a contract with Marvel Studios, the world of superhero movies will likely be taking up the bulk of her time and attention for the foreseeable future.

But let's not get ahead of ourselves. Candyman is still out in cinemas, so if you're looking for a seasonally appropriate trip out, I would say it's well worth a watch!

Whose horror are you watching? Let me know in the comments - I’m always looking for recommendations! 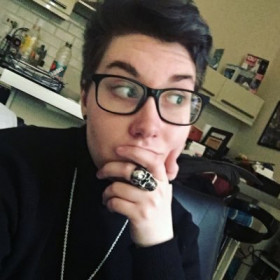