Voice MagReviewsAnnie Get Your Gun r…

Annie Get Your Gun (written by Dorothy and Herbert Fields, as revised by Peter Stone) is based on the life of Annie Oakley – an amazing American sharpshooter who lived in the years 1860-1926. The musical sees her journey in Buffalo Bill’s Wild West show and her romance with sharpshooting partner Frank Butler. The two are highly competitive with each other in their shooting game but, in the end, they fall in love and get engaged to be married.

The musical is set and was written in a time when gender equality was not as progressed as it is today. Frank Butler exemplifies the misogynistic attitudes of society when he describes having his way with girls and wanting a woman who is not smart like Annie is. Butler is emasculated by Oakley’s strength in character and her talent. He is shocked -–  as are most of the characters – by her typically manly shooting skills. Annie Oakley was a woman who defied conventions of femininity and challenged stereotypes.

However, Annie does feel the need to become more ‘dainty’ for Frank in the musical, and is willing to lose a shooting match against him in order to make him her husband. This reflects the unfairness in society.

The outdoor setting for the show was picturesque and suited the country element of the production perfectly. The shooting matches were very naturalistic in the open air theatre and you felt very much like you were actually watching a Wild West show! Situated by the lake, the sunny weather and the outdoor string lights created a wonderful atmosphere for the performance and aided the storytelling brilliantly.

The stage was a theatre in the round and was so cleverly navigated that you never went long without seeing the performers’ expressions. Sometimes, of course, it couldn’t be helped that the actors were masked slightly or had their back to you but, on the whole, it was very thoughtfully approached.

The musical features an amazing score of music composed by Irving Berlin. It includes the famous “There’s No Business Like Show Business” and “Anything You Can Do”. I personally came out with all the songs in my head and have been singing them nonstop! The vocal ability of all the performers was exceptional. In particular, the extent of Gemma’s talent for singing was shown in “Anything You Can Do”. Her range, and the length she could hold a note for, was amazing!

In total, I watched the performance 3 times (as I helped out with stewarding for two showings) and, each time I watched it,  I noticed new things and grew to love it more and more. For most of us in attendance at the shows, it was the first time in a very long time we’d been able to see live theatre and live music. It was clear that the shows brought a lot of joy to lots of people. Running from 20th-25th July, Annie Get Your Gun was a spectacular triumph. 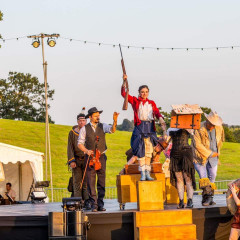 Annie Get Your Gun review