Dr Stephen Strange is world famous surgeon who has an ego bigger then his head.

He gets into a car crash that shatters the bones in his hands. He tries to hire the best of the best to fix them but it is futile. Then he founds out about a man who had broken his back and yet was able to walk.

Strange found him and the man told him that he had gone to a place that had helped him heal his back.

He went to that place and the Ancient One shows Strange how to use magic.

He has to accept that magic exists, he learns fast and has to fight the henchmen of Dormammu.

Dr Strange confronts Dormammu saying he wants to make an offer but Dormammu kills him. Then Strange reverses time repeatedly for a good 100 times until Dormammu agrees to leave Earth alone.

At the end of the movie Dr Strange does not have an ego.

I personally think the movie has a great ark for the character of Dr Strange and is a great add on to the Marvel films collection.

I do think it achieves what it sets out to do. The effects are great, the story is exciting and characters are relatable. 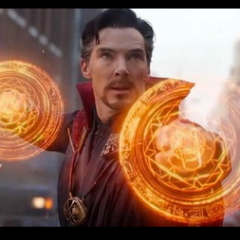