Voice MagReviewsCome From Away revie…

A musical about 9/11 seems like it’s taking the trend of retelling history onstage – a momentum in many ways carried by the likes of Hamilton and Six – too far; the events of 11th September 2001 hardly seem appropriate for the medium of musical theatre. Irene Sankoff and David Hein, the Canadian husband-and-wife masterminds behind Come From Away, have indisputably proven, however, that the story of the 38 planes diverted to Newfoundland when the US airspace closed, and the 6700 people who remained grounded there for five days, suits the stage far better than anyone could have anticipated.

In a time when the status of migrants and the generosity and acceptance of Western nations is under question, the warm and welcoming reception the ‘plane people’ received from the citizens of Gander is as heartwarming as it is heroic. The 12-strong cast is so adept at filling the stage and switching effortlessly between Gander natives and passengers from the planes that you are shocked to realise how few of them there really are. Simple and slick costume and accent changes are unquestionably convincing, and – in a refreshing change from the usual glamour of the West End – the cast is made up of people of all races, shapes and sizes, representing a plethora of normal people caught up in an abnormal situation.

There are a lot of logistical issues with hosting almost 7000 people in a town of only 9000 at very short notice; not an obvious source of entertainment, but flawlessly injected into this 100-minute whirlwind in moments big and small. A Bible transcends a seemingly insurmountable language barrier, the Lions Club receives more spare toilet rolls than they know what to do with, and a hockey rink becomes the world’s largest walk-in refrigerator. No detail is too small or insignificant, and each contributes to the growing picture of the small community that gave so much.

The music, which is littered with Irish roots, will stay in your head for weeks to come; there is no number that does not fit, no song that is easily forgotten. Motifs are woven ingeniously throughout the soundtrack, and the closing number packs such a punch it has the audience on their feet the moment it ends. A standout performance from Cat Simmons as Hannah, a mother whose son is a fireman in New York whom she cannot get ahold of, offers many of the heartbreaking moments across the show, while Alice Fearn’s Annette provides comic relief that will have you in stitches.

In fact, it is a surprisingly funny and genuinely uplifting show. It is, of course, based on events that showcase the worst of humanity, and it certainly does not shy away from the uglier sides of the aftermath, many of which are shown through the horrendous and devastating experiences of Ali, a Muslim man played by Jonathan Andrew Hume. It also, however, shows the best of humanity, and the generosity and genuine goodness of the people of Gander is truly heartwarming.

Come From Away is entertaining, there is no doubt about that. But, more importantly, it is a reminder of how good we can be, if we choose, and we all need reminding of that every now and again.

Want to see Come From Away? Check out Voice’s discounted tickets!

A huge thank you to Encore Tickets for arranging the tickets. 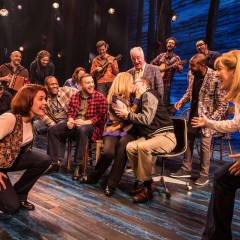 Come From Away review