Zoo Co’s production of Sirens is one of a small handful of Fringe shows that includes captioning or British Sign Language in the show itself. There are, I’m pleased to say, a reasonable number of shows with captioned or BSL interpreted performances, but Sirens actually incorporates it into the piece, mainly because one of the actors, Jamal Ajala, is deaf. The cast underwent an intensive week-long BSL training course in order to learn enough BSL to communicate with Ajala and sign certain parts of the script; a mammoth task for which I respect them greatly.

Fleur Rooth, Florence O’Mahony and Rosalind Hoy play the three sirens who are forced to lure men to their deaths with their voices. Thrust into 2018 by Zeus, they are shocked and amazed when they meet Ajala’s character, who is deaf, and therefore not susceptible to their powers. I was really intrigued by this premise and really wanted to explore their relationship with Ajala, but unfortunately the plot seems to stray from that idea into a far less interesting storyline regarding a book they want to steal back from a museum. I wish they had invested more time in that concept, which I think has a lot more potential.

There are a lot of very important topical issues addressed in the show - misogyny, freedom of expression and sexual harassment, among others - and I like how some elements are simply part of the story. Rooth’s character is attracted to a woman and O’Mahony finds herself drawn to drag, and that’s just who they are, which is brilliant. Unfortunately, they are trying to make a point about so many things that it often feels rushed, and pieces of physical theatre are so brief you can hardly process them or wonder about their significance before they’re over.

The set is used well and the captions are well incorporated into the projections, and the signing feels very natural as part of the show. Sometimes the jokes are slightly forced, but in general the acting is good, and the costumes are lovely. I wish they had focused more on the relationship between Ajala’s character and the Sirens, and the show would benefit from a slower pace, but it is an uplifting and ambitious piece of theatre.

Sirens is on at 15:35 at Pleasance Courtyard until August 27th. For more information and to purchase tickets, visit the EdFringe website. 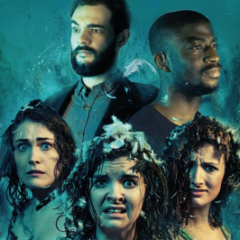