I am, I’ll readily admit, something of a Shakespeare snob. As such, I was slightly terrified of seeing this show because I was afraid it would be as dire as every other Shakespeare-inspired show I’ve seen at Fringe before. Thankfully, it wasn’t dire at all; far from it.

The script is extremely well written, with an excellent style and form that truly echoes much of Shakespeare’s work. Soliloquies and the odd rhyming couplet solidify this link and the heavy innuendo and hilarious insults are wonderful. The actors did trip over their lines a fair few times, but I think that’s just because it was the beginning of their run, and they’ll become more comfortable with the language as they go on.

Various famous Shakespeare quotes are also littered through the script, often with a subtle change that alters them to suit the situation, and these are very amusing and well used. Occasionally the actors sound more like Yoda than Shakespeare, but overall the script is highly impressive.

Of course, the show is littered with Ghostbusters references as well, from the jackets with the logo on and the foil guns covered with fairy lights to the storyline and of course, the theme tune. The set and costumes are both basic but work well, particularly as the actors use the three white screens to brilliant comedic effect throughout the play.

Great fun to watch and full of laughter, this is a show that successfully brings together two very different types of entertainment.

Ministers of Grace: The Unauthorised Shakespearean Parody of Ghostbusters is on at theSpace on the Mile at 11:10 until August 10th. For more information and to purchase tickets, visit the EdFringe website.

NB. A former writer for Voice acted in this play. I attended having never met him. 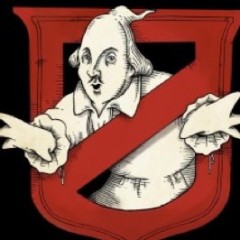