As one of the only openly queer, black singers in mainstream music, Monáe uses this album to take aim at what has come to be expected by someone queer and black in RnB. Continuing on from her 2013 album, The Electric Lady, she takes a futuristic, electronic and pop approach to tracks such as Crazy, Classic, Life and retro tinged Take A Byte and allows this theme to weave subtly through the production of most of the album. None of this is surprising when you learn that Prince helped Monáe on the album before he died.

Elsewhere, she proves her allegiance to her musical roots with the passionately soulful but downplayed title track and Don’t Judge Me. They're luscious and wavey with plenty of reverb and subtle bass through which she sings candidly about the perceptions she is held to.

The idea of self-love returns in one of the released singles, Pynk, featuring Grimes, in which she poetically and affectionately muses about the marvel of the vagina. Its video takes this homage a step further and is well worth a watch (don't worry, no NSFW warning needed).

The video for the first single, Make Me Feel, is what turned heads, though. Lauded for the brave and explicit nature Monáe weighs up casual prospects of different genders in a nightclub, chorus line “That’s just the way you make me feel” tells of how ‘the feeling’ is what is paramount for Monáe. “I’m powerful with a little bit of tender…” has been picked up as a mantra by her fans.

I Like That is a nostalgic track; the opening beat feels expertly picked from a decade ago. It’s a triumphant love letter about self-care that Monáe is more than qualified to advise on. I’ll attempt a strange conversion of the frankness, sexiness and risk-taking of Dirty Computer by comparing it to Michaela Coel and E4’s hit sitcom, Chewing Gum. It is audacious in its capacity to say something completely knowable and regular about sex and femininity that just hasn’t been said yet.

All things considered though, it’s far from ‘experimental’ music. The electronic edge gives it a distinctly mainstream feel as a whole. I Got The Juice featuring Pharrell Williams and Crazy, Classic, Life are good examples of pop music that you'd easily call 'bops'. But it seems Monáe isn’t necessarily interested in being a hitmaker, as neither of these tracks were released as singles, even with Pharrell’s clout in tow. “Juice” even carries some commentary as it directly addresses Drumpf’s conduct around women.

My highlight, Django Jane, is distinct for being an upbeat hip-hop track. Monáe launches a visceral, political rap showing not only that, indeed, she can rap, but that her lyrics are incandescent. It’s no secret that Monáe had a colossal year two years ago, starring in lauded roles in Oscar winners Hidden Figures and Moonlight, films that did enormous work in improving film representations of people of colour and the LGBTQ+ community. She pays homage to the projects (We ain't hidden no more, moonlit n***a, lit n***a) and describes the issue at-large as well as gives credit to Viola Davis (How To Get Away With Murder) and Kerry Washington (Scandal) for spearheading the change on television. In addition, she manages to fit in all the earlier themes, too: sex, sexuality, demystifying genitalia and women’s power, the futurism of her early career on top of diving into her early life, blackness and black civil rights. Indeed much of the value of Django Jane is how much Monáe manages to fit in.

Album closer, Americans, is where, I suspect, Prince had greatest influence. Monáe weighs up modern America, swapping between racism and misogyny while preaching that to be critical of something isn’t being anti-something, in this case of America: “I’m not crazy baby. No, I’m American.”

Irritating simply for the lack of attention this and her previous albums have had, Dirty Computer exhibits truthful, marvellously produced, eclectic music that ought be on par with the regard shown to the world's biggest artists. 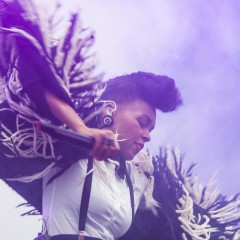