Voice MagReviewsMy Review on the Ala…

Though it isn't to do with my art form, cake decorating, I decided to include my thoughts on the Christmas pantomime I saw on the 23rd December: Aladdin by Wicked Productions. In the past, I have seen many pantomimes by Wicked Productions and even been involved in a few, so watching it brought back memories as many of the cast were the same people I performed with. I also knew the story of Aladdin, but I think the pantomime described the story well, so I would have understood it anyway. The laughs kept rolling in, as like all other pantomimes before, it was full of entertaining content and funny characters, such as the dame of the pantomime.

I think my favourite part of the play would have to be the point where the characters took a break from the story line before the interval and began to sing 'The Twelve Days of Christmas'. This consisted of getting an audience member up on stage, stealing the props the other actors were using for the different objects and even throwing toilet paper into the crowd! It was a hilarious moment, so it stuck in my mind. It was a wonderful interactive performance full of shenanigans and classic pantomime elements, so it was nostalgic of what has come before it. I would definitely recommend the pantomime, though now the show has stopped running, but the Easter pantomime will be coming up soon! The only part that wasn't so fun was when the characters sprayed us all with water guns during the performance, but it was all in jest and only ended in more laughs! 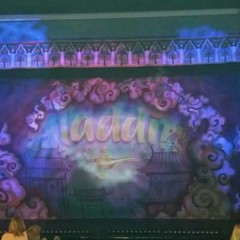 My Review on the Aladdin Pantomime