Ten minutes into Stirling's stand-up comedy performance and my cheeks were hurting from laughing so much. As the narrator of the summer's hottest show, Stirling is both perplexed and annoyed by the fact that his voice is more famous than his face, and that the audience entering the venue get more excited about taking pictures of his Love Island water bottle than actually seeing him perform. He proves, however, that he's just as funny - perhaps even funnier - live onstage as he is behind the camera, and even more loveable.

The Love Island references were, as you can imagine, frequent, but they never felt forced or over the top, and Stirling made sure to make them amusing for those who didn't watch the show and were dragged along by those who did. Most of the material wasn't about the show, however, and focused on anecdotes about his experiences as a kids' TV presenter and his now-very-boring friends. Although I found it very funny, I think some of his jokes were appreciated more by those in their late 20s and early 30s, and - as an 18 year old - I struggled to relate to all my friends getting married and having children…

The show flowed effortlessly throughout, and somehow, although he conversed with the audience multiple times (even tackling some heckling), Stirling managed to seamlessly weave those interactions into his routine so that there was hardly a lull in the entire hour. The pacing was spot on and he never once lost the audience, although I found the initial 15 minutes the funniest and it wasn't quite as gut-bustlingly funny later on. His mad enthusiasm - and appallingly bad language - make the show a delight to watch, and had the whole audience laughing throughout. Definitely worth a watch! 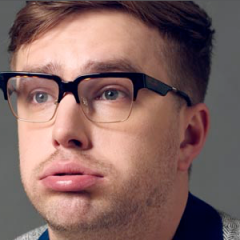