Voice MagReviewsNina Conti: In Your…

I didn't need to see the full show to realise that Nina Conti is sublime.

The BAFTA-nominated, comedy Queen of improvised ventriloquism sold out the Pleasance Grand and blew the roof off with her now legendary monkey puppet and variety of masks. You'd like to think that your version of this show must've been far more special than anything else Conti could've thought up on another night. You underestimate this juggernaut.

Nothing went wrong. There wasn't an instant that was quiet for the constant laughing and applause she created. Part way through, I felt an obscene sense of privilege for getting to see such a figurehead of British comedy produce such a relentlessly entertaining hour. I had a great seat, too.

Of course, she brought several people on stage during the course of the magical show upon whom she bestowed masked versions of themselves. I couldn't help wondering how much happier I'd be if I were whatever ingenious persona she'd conjure for me.

The charisma and charm with which she treats her characters and the audience both on and off stage is rivalled by no other. Herself having a comparably meek persona provides a subtle but crucial juxtaposition with the crude and juvenile characters she creates.

Pure genius and timeless – the best thing I've seen in my three years attending the Fringe.

Nina Conti: In Your Face is on at the Pleasance Grand at 20:00 until 29 August (exc. 16 August). For tickets and more information, visit the Fringe website. 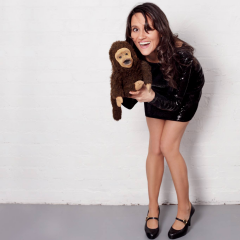 I didn't need to see the full show to realise that Nina Conti is sublime.