A burst of radio nostalgia, but nothing new to the formula.

I am certainly showing my age when I say that I wasn't aware that this used to be a radio series. A quick bit of research showed that this first aired in 1980, and came off the air in 1987. I wasn't born. But does the comedy hold up 25 years later?

On the whole, yes.

The four certainly still had a great chemistry, and the jokes came out easily. The jokes that did hit the mark absolutely destroyed. They were timeless, using mispronunciation and observation to good effect, and the songs were great too – who does't find Status Quo dreary!

That being said, some of the jokes were easy gags; predictable and subsequently unfunny. There was more than on occasion where the deliverer of the joke stood, almost in anticipation of raucous laughter, and was met with a titter. The relied on old troupes and clichés, performed a thousand times before – but may have been cutting edge when they were first written.

I also felt that Angus Deayton was somewhat cooler than his co-stars, and I don't mean in a Fonzie style. His style was lacking in the joy and enthusiasm that was so clearly conveyed by the others; a real shame given that these were his scripts.

Radio Active is an innocuous hour of radio sketch, that successfully taps into the real life frustrations and oddities of radio. Arguably it is too tame by todays standards, but I can appreciate how it may have been relevant and 'edgy' once.

The Radio is indeed still Active, but it's starting to get crackly.

Radio Active is performing at the Pleasance Courtyard. Tickets and more information can be found here. 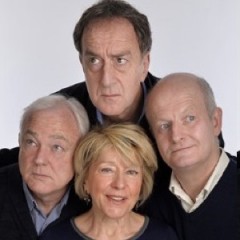 A burst of radio nostalgia, but nothing new to the formula.