More of the same from the Devil of Hell's Kitchen

When Daredevil first came to Netflix last year, I described it as one of the best TV shows I have ever seen. It got the balance right between origin story and plot development. There were fantastic character interactions, and Vincent D'Onofrio nearly stole the show with his exceptional portrayal of Wilson Fisk - a 'villain' with complexity and emotional damage. He wasn't bad because it's the done thing, he just had a particular vision on how things should be done, and those happened to not align with societal norms. And don't even get me started on the incredible choreographed fight scenes!

Season 2 does not mess around with diving straight back into the action. The new main antagonist is Frank 'The Punisher' Castle, a violent vigilante with a mysterious past and a penchant for killing. Castle's introduction to the series brings with it an even more gratuitous and graphic form of violence. Castle goes out to kill, and doesn't care whether it's long distance with a gun, or up close and personal with a handmade shiv. If he wants you dead, you will die. This season leaves little to the imagination, with torture and shotgun blasts to the face. In the same episode.

The fights are still brilliantly choreographed, and we are treated to another adrenaline pumping, continuous shot scene down a staircase, that definitely tops the corridor fight of last season. I actually went back and watched it again because it was such an impressive bit of filming. The clip is at the bottom of this review, but really you need to watch it on a big screen to do it justice!

And what of Matt Murdock, the titular Daredevil? It's not unintentional that I haven't mentioned him until now. I found him to be much less impactful than in the last season. He still goes out at night and hands down a beating to those who deserve it. But that's kind of it. There was a point where the show tried to build tension by making it seem that he was going through this moral quandary about killing, but it came off as superficial. His daytime persona is struggling to balance the responsibilities of being a lawyer with his quest to rid the streets of criminals, causing a seemingly irreparable rift between his friends.

A major issue with this season is just the level of cliches and tropes that seem to have been packed in. The dark mysterious antagonist with a morally grey compass. The uncompromising hero who alienates those around him in his quest for justice. The delivery of the line "tell him everything's about to change" with a completely straight face. The contrived love story that came from nowhere and falls apart due to a misunderstanding. And Daredevil's voice is starting to become worryingly close to that of Christian Bale's Batman - always growing and screaming like he's smoked 80 a day.

I was pleased to see a return of Kingpin, but found that his presence, while chilling, was entirely too short-lived. It whet the appetite for a return of a character whose sheer tenacity, elegance, and powerful outbursts dominated the last season… and then he was never returned to. It seemed a waste, to me.

Maybe Fisk was a victim of what felt like a season with a pacing issue. Season two missed the mark in terms of establishing and maintaining a consistent pace. It would explode with ferocity that had you on the edge of your seat waiting to see where it would go, and then the brakes were aggressively and ill-advisedly applied, slowing to a crawl while the characters had a bit of a tiff, then bam, back to full speed. It was jarring.

This said, it was nowhere near as jarring as the introduction of Elektra, a previous love interest to Murdock, who, surprise surprise, has a secret dark past. But unlike Castle, who was entirely new for this season, Elektra builds upon a mysterious plot point that has its foundations in the last - the Dark Sky weapon. What is it? I don't feel that was ever really established, only that it's really dark, really bad, and must be stopped. It seemed to come out of nowhere, and dominate the third act of the season. It just didn't work for me, but your mileage may vary.

It may sound like I'm being very harsh on Daredevil, and to some extent I am. But that is because this is the show that really sold the idea of a live-action comic book TV show to me. It was cartoony, but not patronising, it was clever but accessible, and it was violent but stylish. The characters were well considered, the pacing was good and the conclusion was satisfying. This season, while not objectively worse, hasn't really improved upon that formula. So while it was a perfectly enjoyable watch, I was left feeling a little bit wanting. Perhaps it's suffering from Avenger syndrome, where they got so much right the first time there's nothing left to do, but I don't believe that to be the case. Jessica Jones came out at the end of last year, and tackled many serious issues, while still being charming and captivating.

This is still definitely a show you need to watch, and in my opinion is more successful in creating a cohesive universe than DC's offering of Arrow/Flash/Constantine. DC play it safe, perhaps because they are airing on traditional television, but once you've watched Jessica Jones, Daredevil or even Deadpool, you can't help but feel there is a level of immaturity and cheapness to DC's roster that is hard to ignore. 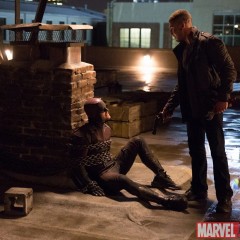 More of the same from the Devil of Hell's Kitchen