The show begins when Carole was just 16, yet nevertheless she had skipped two grades, and hence was already in college. She composed her first hit song, "Will You Love Me Tomorrow," in 1959 when she was 17, pregnant and recently married to a handsome 20-year-old lyricist Gerry Goffin.

In the following years King and Goffin produced smashing hits, and were sensational. Additionally throughout these years the couple had a strong friendship with a rival composing couple, Cynthia Weil and Barry Mann. By the time King had reached her twenties she was writing hits for the biggest rock 'n' roll performers, from Aretha Franklin to the Monkees, the Drifters, and to the Shirelles. When King's personal life broke down, and she divorced Goffin, she found her true-self.She released an individual best-selling breakthrough solo album; Tapestry. The deep meaningful personal collection of songs, sung by King herself became one of the best-selling albums of all time, and still flourishes today. 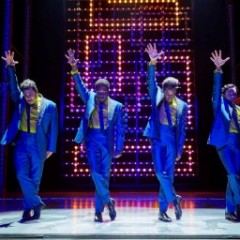