A review of the film The Suicide Squad

The Suicide Squad ( also known as suicide squad 2 as it is tecnicly considered a sequal) is an amazing film with quite a lot of heart put into it. The wide cast is impressive and helps introduce more obscure characters to a wider audience like the weasel , rat catcher and poker-dot man and also keeps some familiar faces from the previous suicide squad (2016) with harley quinn, captain boomerang,Rick Flag and the big boss herself Amanda Waller however you don’t need to watch the 2016 Suicide Squad to to watch it as it is never referenced.

The basics of the plott is that ,like the first Suicide Squaud film, Amanda Waller has gathered some of the worlds most dangerous criminals  to go on suicide missions with bombs placed inside there necks in order to get a shorter prison sentance. This time they start off with 2 teams with one being destroyed and mainly used as a distraction to allow the other team to enter. I do personally feel like they done more development with the characters and kill them off as the story progresses however it does definitely show the spirit of the suicide squad as in the comics characters die quite often. The current mission that they are on is to disassemble the regime inside a country, or so it may seem, one of the pieces I especially enjoyed was that the film was that the actual purpose of the mission was kept somewhat secret mainly because of how it incriminates the US government .

The costume design was amazing with more vibrant colours but somehow still having that feeling of being modern . For example Harley quinns outfit at the start of the movie has clear inspirations from the Arkham games and Injustice 2 with the corset piece and the 2 toned pants. There is also poker-dot man whose outfit is simultaneously comic accurate, colourful, wacky and futuristic or Bloodsport who had a significant redesign, which was possibly done in order for him to resemble deadshot more who was apparently part of the original script.

Another thing that I really enjoyed was the different acts of the film and how the title of the part would visually be shown through the environment like how the title was once shown through fire before being blown away to say that they were going to save harley. This ads a new level of creativity to the project in comparison to just average text and the top left side of the screen and allows you to see the gruesome wackyness that the suicide squad is meant to be.

All in all I feal like ‘the suicide squad’ is a huge improvement from the previous ‘suicide squad’ especialy in the tone , humor and gore as James Gunn seems to have taken the 15 age rating to his advantage a kept as much adult content as he could. 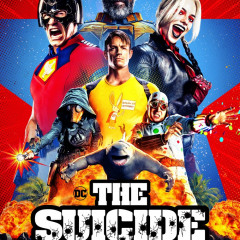 A review of the film The Suicide Squad