Max Fosh begins with a montage of his life - from vlogging in a nudist camp, to his bid to run for Mayor of London. His show is just as wonderfully random as his life, as he brings his YouTube humour to the stage. In a strange and hilarious turn of events, an investigation into the Gary's of the world leads to Fosh legally changing the name of an audience member to Gary!

Fosh's connection with the audience was charming, as he truly brought the "social" to Zocial Butterfly. The small and cosy room complimented his lighthearted and fun show, and we were warned from the start that audience participation was a must (but not in an overwhelming -I-want-to-hide- type of way). Playing into his "posh status" as a Harrow School Alumnus, Fosh carried out a "posh test", asking the audience whether or not they'd used an Arger. He also takes a volunteer's phone and exposes their Notes App, in a section which is as funny as it is full of second-hand embarrassment. Laughter filled the room almost constantly!

The show makes clever use of callbacks, repeatedly playing an alphabet-conversation game which makes a return at the end, and explains the name "Zocial Butterfly." It's light, it's funny, and it's simply a good time! 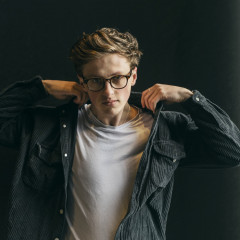