Ivo Graham laughs at the past three years of his life.

Ivo Graham's life since 2019 has taken some turns; from navigating parenting, a break up, and the general impact of Covid, he has a plethora of tales to tell! He begins with an anecdote about doing comedy gigs over Zoom, introducing the audience to his particular blend of comedy – self-deprecating, yet still endearing.

The general themes of his show are familiar to those who have been to other comedy shows this year. However, it is the particulars of his life which bring the humour, as he reads out creative writing pieces from his time at Eton, betraying his loneliness and love of football, and condemns Boris Johnson for ruining his Peppa Pig based jokes he had planned. It was probably his stories about his daughter which brought the most joy, as they were as heartwarming as they were funny.

What was refreshing about Graham was his acknowledgment of his privileged upbringing - he doesn't shy away from it, and instead jokes about his attempts to be more liberal in his views and actions, whilst also remaining aware of the opportunities that have been afforded to him. These discussions don't add a serious note, but instead elevate his comedy! 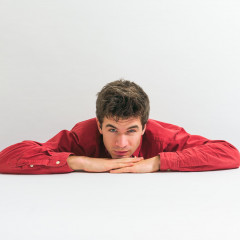 Ivo Graham: My Future, My Clutter

Ivo Graham laughs at the past three years of his life.