Located in the ex-Soviet ghost town of Pyramiden, two caretakers share their competing conceptions of Russia.

Set in 1999, Pyramiden’s caretakers fight and bicker: the older veteran Sasha (Matthew Zajac) is nostalgic for the past whereas youthful Slava (Rebecca Wilkie) wants a better future. This detailed and research heavy piece explores how nostalgia is employed as a weapon.

Solid performances come from Matthew Zajac and Rebecca Wilkie ,who present the dynamic between these two characters. Both actors attack the show with intensity and energy, even during a final act plot twist and fight scene. I loved the lighting and the set, which immediately made clear how off-kilter everything was supposed to feel.

However, for me, sometimes this show felt more like an argument based on ideology than a play, and the majority of the play felt like one single extended scene, where the characters are just going back and forth with opposing ideas. There was little action. And even though the location was heavily described, I felt like the characters could be anywhere. The lengthy passages of the play were difficult to follow and in some way alienated the audience, as I felt like I was missing something.

Despite the well constructed ideas and great performers, ‘Nightlands’ asks more questions than it answers. 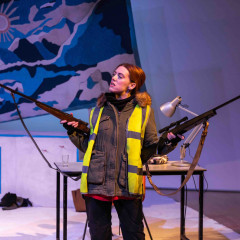 Located in the ex-Soviet ghost town of Pyramiden, two caretakers share their competing conceptions of Russia.