If you find the works of Edgar Allan Poe somewhat tiring and gruelling, this show might not be for you. As the title suggests, it is a one man show of some of the most well-loved works from one of gothic literature’s greats. It also comes in at around two and a half hours (thankfully with a 20-or-so minute interval). Although its impressive run time does make the performance all the more well, impressive, it does ensure that you need a solid attention span and an ardent love of Poe to truly appreciate it, and unfortunately, I have neither.

There are undeniably enjoyable parts to the show, however. I personally loved the costume and makeup design, all the more so because the makeup changes were done in full view of the audience, allowing us to see each new character be built before eventually being “birthed” fully formed like some self-constructed Frankenstein’s monster. Actor and director Stephen Smith also for the most part gives an engaging performance, conveying character and space with limited means. However, I tend to balk at the sight of the Kubrick stare these days, it having lost all of its effectiveness from overuse, so several instances of that diminished his performance’s impact.

To give credit, I did also feel that for anyone coming to this show without a particular liking for Poe’s work, it was more enjoyable and accessible for being performed rather than read. Poe’s work thrives best in adaptation, in my opinion, but then again is where One Man Poe lost me. Each story was performed for the most part word for word, read as monologues, brought to life with all the wonders of the stage but still very much the work in its original form. The show might have gained something from reshaping or reinterpreting the original stories, but instead it all felt a tad by the book (pardon the pun).

For the avid Poe fans out there I’m sure this will be a delight (or as delightful as Poe can be), but for the ambivalent, this feels more like some kind of strange endurance test.

One Man Poe will be available on demand until 13 November. You can book tickets here. 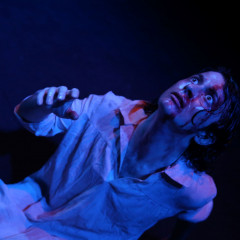