Workers in Glasgow City Council’s cleansing department have gone ahead with industrial action to protest for better conditions for lowest paid workers.

Rubbish collectors and street cleaners are striking in Glasgow this week during the climate summit COP26. Thousands of council workers are striking for better pay and conditions, and have taken the event as an opportunity to put increased pressure on the council to meet their terms.

Members of the union GMB Scotland in Glasgow City Council’s cleansing department will be striking this week due to the council failing to give "proper time and space" for workers to consider an offer made by COSLA, an employers’ association for Scottish councils. COSLA had proposed a one year 5.8% pay rise for lowest paid staff. GMB Scotland, along with Unison and Unite suspended strike action on Friday whilst they considered the offer but confirmed on Sunday that the strike would go ahead.

Speaking to Good Morning Scotland, union member Drew Duffy explained their reasons for striking, saying: "The workforce are the lowest paid workers in Scotland. There are deep rooted problems within Glasgow City Council. We have been trying to meet with the council.

"It is a constant breakdown of industrial relations, there have been long standing problems with low pay and discriminatory pay and our members have just had enough. The conditions they work in, the pay they receive is not good enough."

Glasgow City Council have expressed that they are displeased with the decision to strike during COP26, saying it is a “busy and difficult time” for the city. GMB say that they had no other option and that workers have been “put in a corner” by COSLA.

When GMB initially announced they would consider the offer, it was for a two-week consultation with members, before their announcement on Sunday that strikes would continue. A council spokesperson has called the decision “very disappointing”, saying: "We have already agreed their request for time to meet with their members.” However, they added that “while we remain available to meet with them at any time, we are unable to deliver their request for a pay increase.”

The Scottish government is not involved in the negotiations, but made a one-off offer of £30m in additional funding to aid the process. Speaking to BBC Radio Scotland, Scottish MP Michael Matheson said: "The GMB locally have entered into a dispute now with GCC which I understand is not to do with the actual package itself but it's the process around being able to engage with their members and discuss that with them.

"I understand that discussions were taking place last night and the Scottish government would want to continue to encourage Cosla, GCC and the GMB to continue to discuss this issue and to try and find a quick resolution to what I believe is a process issue rather than an issue around the deal that was proposed."

ScotRail and Stagecoach buses had also announced plans to strike during COP26 but called off the action after pay deals were made. 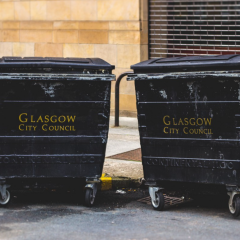 Workers in Glasgow City Council’s cleansing department have gone ahead with industrial action to protest for better conditions for lowest paid workers.