It depends on what hat I’m wearing…. If I’m recording I get in, check and set up the equipment and make sure the sound is coming out of the speakers! Then the artist and producer come in and I make sure everything is set to go and get ready to record.

The great thing about all the things I do, is that if I do them well, I get to make a positive difference to people's lives. Whether that’s making records, writing, or advocating / representing for members of the MPG. That’s what gets me out of bed in the morning, the idea that the stuff I do that day may make some small positive difference to someone’s life.

Nothing I don’t like, but the long days involved in a studio session can be a challenge

Being involved in the recording process with the likes of Frank Turner, Amy Wadge, Katie Tunstall and Julia Donaldson.

Winning highly commended in the Life Writing Prize 2021 for Tromode House, a piece of life writing that explores events leading up to me being evicted from my home at thirteen years old, and ending up living in the state care system.

Outside of music production, you also have experience with writing. You’re currently working on a memoir about your experiences growing up in the UK care system. Can you tell us more about it?

Off the back of winning the Life Writing Prize award Alice Lutyens from Curtis Brown became my agent. The piece that won the award, called Tromode House, will be the first chapter of the book.

The memoir is about me going into care at 13 and leaving care at 18, and exploring the ‘Every Child Matters Policy’ and how that shaped my time in care – examining and critiquing it.

It was the most transformative policy in decades – its heart was in the right place but there was a lot wrong with it. The ambitions were right but it didn’t work in practice.

How have you found the process of writing the book? Has it been challenging to reflect on your time in care?

I don't know whether it’s normal or not, I’ve found the writing so far emotionally exhausting rather than traumatic. It’s been clarifying to write and clear up a lot of unanswered questions.

In order to write the book accurately, I managed to obtain all my social care notes. The most discombobulating thing about that experience is that you’re reading memories you thought you knew well but from someone else’s perspective. Key details that add context to a situation are missing. It’s a bit confusing and you have to remember it's someone else’s perspective.

To be honest, it’s almost violating.

And how have you actually approached writing the book? Do you have a set style of working, or do you write when you have inspiration?

My time in the care system was a real journey, as you would expect, as I’m going from a teenager to a legal adult. Therefore I purposefully haven’t set any style, as I want it to change as my perspective changed over time.

Because I have a tendency to make myself busy, I only write when I have the time. There's an interview with Paul McCartney where he describes the mad earlier period of the Beatles, and the joy he would have when his manager would call and say, “right boys, you’re gonna have next week off to write the album”. That’s kinda like me right now. So, I’m always excited when I find I have spare time. I really enjoy it.

How do you think growing up in the care system influenced you, personally and professionally? How does it fit into your identity?

It’s not part of my identity It’s just a part of who I am.

How has it influenced me - luckily I’m currently writing a book which should explain that in detail. But seriously, I often feel like an intruder in the music industry because statistically I should be in prison. I’m never really sure how to act… I often misread social cues and assume people are judging me because of my upbringing, even though I know that’s not really the case.

I think this comes from being in care where people have a preconceived idea of you, and you feel like you’re always being questioned and judged.

Professionally, I think it’s influenced by being able to absorb immense pressure. To work at the highest level in the recording world, you have to be able to deal with truck loads of pressure. Having been rejected by my family and living in children’s homes, plus everything else that went with that life taught me how to absorb the pressure.

What are some common misconceptions of the care system?

The most common preconception is that people assume care leavers are thick and will amount to nothing! When in actual truth, we are some of the most creative, tenacious, and resilient people you would ever meet. That being said, just because we are, doesn't mean we should be expected to be.

Are there things about the system that you think can be improved, or should be changed? For example I read your article about the Care Cliff and was shocked at the lack of support post 18.

We were abandoned by our parents as children and then abandoned by the state as soon we turned 18. This really needs to change.

Do you have plans for further books once your current memoir comes out?

Yes, a collection of essays about being a care leaver. I also fantasise about writing a biography of Mel Blanc – The Man Of A Thousands Voices, who is known for voicing the likes of Bugs Bunny, Porky Pig and Taz.

I have worked outside the arts. My first proper job at 16 was in McDonalds, where I stayed for 9 months.

I’ve always been obsessed with music and that started with creating ringtones on a Nokia when I was 8. I started playing the guitar when I was 15 after an agency care worker showed me some cords and I didn’t put it down after that.

I got into the creative industries through hard work and sheer determination. What do I mean by that vague statement? Well, I operated under a huge amount of fear. Fear of failure. Fear of not being good enough. Fear that if it all didn’t work, I’d have nowhere to go, no bed to sleep in. And that fear meant I worked harder than anybody else, because failure literally could not be an option.

3 years ago, I was lucky to find a new studio opening in West Oxfordshire called ARC Studios, and they have been great to me. My background was irrelevant to them, they just cared about how good I was. But they did recognise my situation and supported me so I built a career.

Getting started was the biggest challenge. It’s like trying to play snooker with a rope, it’s not impossible but you have to be creative. The easiest way to be creative is to just ask questions. It’s by asking questions you find the opportunities and reveal the barriers. Then it was just learning to have the courage to take those opportunities.

Every time I threw caution to the wind, it paid off massively. It was risky. Very risky. Because I channelled my fear of failure to work harder, failure from taking the risk became nominal. After all, fortune favours the bold. Someone said, if you ain’t got nothing, you ain’t got nothing to lose. They were right.

There’s been a lot of changes in the industry to increase diversity and make the industry more accessible, however the biggest weakness is ensuring lower economic backgrounds are included in that. It’s not a visible trait so is often overlooked.

If you’re gonna have dreams, you have a responsibility to turn them into a reality. I learnt this from the care system, that no one else is going to do it for you. If you want it to happen, only you can do it.

Never give up and keep going… It's like banging your head against a brick wall but it will crack eventually and you will get there. It may feel that it is an industry closed for people like you, but it really isn’t… You have to earn your position, and earn your knowledge, that way you’ll be respected. It might not happen as quickly as you’d like but just keep going and you will get there eventually.

Read everything I’ve said in the previous questions, because the barriers I’ve faced, they will probably face.

Also, research other people in the industry. There’s lots of generous people out there willing to give people a leg up and there is a real community spirit so try and reach out to people. Even if it’s online. You will be surprised how it will pollinate.

Feel free to follow me on my socials and I’ll be happy to answer any questions.

Where can people find out more about you and your work? 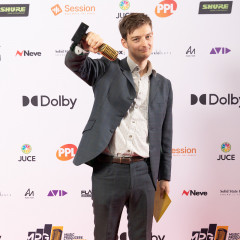