Award-winning author Pumla Dineo Gqola speaks to us about her latest book, Female Fear Factory, and how the only way for women to have a brighter tomorrow is to dismantle the patriarchy altogether.

Can you introduce yourself and tell us about your creative career?

I am a southern African feminist author and academic. I live in a small coastal city in South Africa called East London. I write fiction and non-fiction, and, although my first publications were poetry and short stories, all my books have been non-fiction. I have written five books. I am very excited that my latest book, Female Fear Factory, has been published by Cassava Republic Press and is available in the UK.

How did you get into writing?

I was a very enthusiastic reader as a child, what they called a book worms in the early 80s. One day I was avoiding doing homework while messing about producing something that looked like a poem. It was the kind of terrible poem only a parent could love, but my parents acted as if I had just done something miraculous, so I kept at it. Teachers later encouraged me to submit poems to teenage publications, school magazines, etc.

What has your experience been like in the industry so far?

This is my first book with an international publisher, but I have had short stories published in anthologies by international publishers. I have had some success in South Africa. Most of my books sell well. I am a recognised, working writer there. I’ve won the most prestigious non-fiction award, the 2016 Alan Paton Non-Fiction Award, for my third book, Rape: A South African Nightmare. The South African edition of Female Fear Factory was awarded Best Non-Fiction Humanities and Social Sciences by the South African National Institute for Humanities and Social Sciences (NIHSS).

Tell us about your book, Female Fear Factory: Unravelling Patriarchy’s Cultures of Violence.

Female Fear Factory is the name I give to how women are socialised into fear, so as one of the writers I quote in the book says, “fear can be something we expect from women”. I show why it needs to be constantly publicly produced and draw on examples from different parts of the world to show both examples of what the FFF makes possible as violence and how it is disrupted in every day and monumental ways. Readers will recognise what I call the female fear factory. An important step in dealing with a problem is giving it a name so it can be confronted and strategised against. That is what I do. The examples I draw on are from the UK, India, Nigeria, Kenya, South Africa, El Salvador, the US, Saudi Arabia, and so on.

The book is about The Female Fear Factory; I illustrate it clearly as part of writing against it.

In your opinion, how has a ‘post-me too’ era changed things for women?

I don’t think it has changed much except perhaps to spotlight the gravity of an issue that women across the world have been fighting against for some time. Perhaps the prominence of #MeToo and the celebrity of many of the women associated with it drove home just how prevalent violence against women is across all strata of our societies and around the world.

Perhaps some organisations and powerful figures are more careful now than they would have been in the past and perhaps more receptive to women’s accounts of violence. But I think it is important to recognise that #MeToo is part of a long process. It just had more prominence because of who it affected.

What do you want people to take away from your book?

There are several things, so I’ll mention two. First, I want readers to have a clear sense of the scale of patriarchal violence, how it affects and impacts all of us, and how central what I call the ‘female fear factory’ is to that violence. Second, in reading about the strategies to dislodge and ultimately end the normalisation of fear, I hope readers will feel like there is something we can do in small ways as individuals and collectively as movements to end this constant terrorisation of women that [the] patriarchy relies on.

A podcast exploring female fear amongst women around the world has been born from this book. What are some of the differences in patriarchal control you have noticed in speaking to women from different parts of the world?

The book already pays attention and works with similarities and differences in how patriarchy uses fear to terrorise women across the world into staying in place. So, the podcast has been wonderful in highlighting some of the arguments and supplementing some of the examples discussed in the book from different parts of the world.

What’s something you learned in the writing of this book, and did it alter your perspective in any way while writing it?

I realised I had been thinking about some of these ideas for a long time. I rediscovered a short story written in my twenties and published in my thirties. The characters acted in ways consistent with how I argue we can slowly chip away at patriarchy and the Female Fear Factory. I had thought I had come up with it in Rape: A South African Nightmare and developed it into the new book. It was a lovely surprise, and it kept me writing.

What are some of the fundamental things in our society you believe need changing to make tomorrow a better day for women?

We have to dismantle patriarchy completely. That is the only solution. Patriarchal societies are not designed with better days for women in mind. They are designed to keep women stuck, contained and fearful.

What advice would you give to your younger self?

I would tell myself to keep going after my dreams because they are valid, and I would implore myself to be much kinder to myself. I already knew the former. The latter has been a much harder lesson.

Where can people buy the book?

It is available through UK bookshops on and offline, as well as on order from the Cassava Republic Press website. 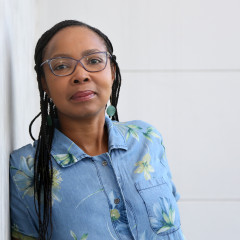 Award-winning author Pumla Dineo Gqola speaks to us about her latest book, Female Fear Factory, and how the only way for women to have a brighter tomorrow is to dismantle the patriarchy altogether.