I'm Tiff Stevenson, my show is called Seven and it's about how we make huge international events all about us. I explain this by making it about me. I'm interesting see & I'm good at comedy.

I don't really know what that means. I danced for years as a kid so probably seeing the ballet at Sadler's Wells. I thought I might dance as a job at one point. Really I'm just a failed dancer, how funny is that? FUNNY

It was on Crimewatch I was an excellent victim. Michelle Heaton from Liberty X was also on the same episode. Sorry for the name drop

That people pay to listen to my ideas, I can have a thought at lunchtime and say it on stage in the evening. There is an immediacy to stand up that makes it great. Acting wise it's getting to collaborate with other great performers and seeing what you bring out in each other

If they laughed or cried - I'll take either but that's just for stand up.

Maya Angelou to do a play. Stevie Nicks to do a musical, I'd call it 'The last golden straw' and George Carlin for a double act 'Tits & Teeth'

I've been coming to this fringe since 2006 so it's actually my 10 year anniversary. My first year I performed in the Stewart Lee helmed Talk Radio in the Udderbelly. So in 2006 it was really because I wanted to perform in a giant inflatable, upside down purple cow. Every young girl has a dream...that was mine. That and my own Garbage Pail Kid sticker. I got that sticker so I guess really I'm just very #blessed

Nope unless you like the 'traditional' things of good lighting, no sound bleed and your own dressing room

Hey 16 year old Tiff! When you are in your 30's people will relentlessly ask this question and should you probably start thinking of an answer now

What advice would you give to young people who want to enter the same industry?

Grow skin thicker than a rhinos arse, it's tough out there. Or make sure you have super loaded parents who will pay for everything, put you through drama school then get their friends to give you jobs 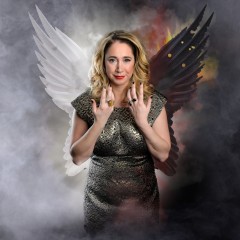