In the run up to Voice's latest coverage of the Edinburgh Festival Fringe, we have dozens of interviews with performers like Masud Milas, who is bringing his debut show to the fringe!

I'm a mixed race guy living in London with a confusing accent. The show is about growing up in Hong Kong (which neither of my parents are from) and living in New Zealand with my Kenyan mum and making the UK my home.

I remember going to a gallery on a school trip and thinking: it's just loads of old paintings innit. What's the big deal. I'm not very good with art.

A friend of mine dared me to do comedy a few years ago and we sat up the night before and wrote a set. It was pretty bad but I enjoyed it and foolishly kept going.

I think it went okay. The only thing I remember was being nervous that if I sucked they wouldn't pay me.

When you've been crafting a joke for ages and it finally works.

Not quite knowing if something will work or not. It's not "the worst" but it can be pretty frustrating.

I think the audience helps you make that decision. It helps to record shows too. Just to double check you're not delusional.

I'd like to make a movie with Robert Rodriguez. He tends to work on fun projects and that comes out in what he does.

I remember my dad talking about it and he mentioned those kooky shows that were in a shed or the back of a taxi, they seem like a lot of fun.

I don't think so, but that depends on what kind of show you're doing. I think it's more like a chance to perform your show and hone it without going on tour.

Write stuff down. I'd probably also give him a hoverboard.

Be nice and work hard.

Sure @masudmilas. I also have instagram but I don't use it. 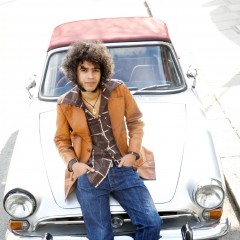 In the run up to Voice's latest coverage of the Edinburgh Festival Fringe, we have dozens of interviews with performers like Masud Milas, who is bringing his debut show to the fringe!