Heaven Crawley, a professor of International Migration, explains the realities that refugees are facing and how the UK government is failing to provide them with safe and legal options.

The following interview has been lightly edited for brevity and clarity.

What are some of the factors that drive so many people to risk their lives to reach the UK?

Well first of all it's really important to put this into context, because it’s not that many people trying to reach the UK. The vast majority of refugees are in their country or their region of origin, about 85-86% never even get to Europe or anywhere further. And then the ones that come to Europe, most of them stay within Europe, so there are much higher applications in France, Germany, Italy, Spain – pretty much everywhere other than the UK, where the numbers have been low for 20 years, really.

That said, I do think that the latest numbers have been much higher than previously and that’s due in part to the fact that when the UK withdrew from the European Union as part of Brexit, it also withdrew from the Dublin regulation, which is the part of the European legislation that allows countries in Europe to return people to the country that they’ve passed through on their way. My suspicion is that people smugglers are basically telling people that if they go to the UK, they can’t be returned and that’s why we’re seeing the numbers going up.

So, the drivers are the same as they’ve always been, conflict, human rights abuse, poverty, inequality, all those things, but the factors that change peoples’ destination country really depend on other things.

The government at the moment is heavily arguing that so-called “pull factors” are the main reason that people emigrate here, how relevant are they really?

They’re rubbish. I’ve been doing research on decision-making of refugees and asylum seekers for more than 20 years, including when I was at the Home Office. The Home Office commissioned a study on this while I was managing the file and research programme, and when you talk to people about the reasons why they end up coming to the UK, they’re almost invariably reasons that are beyond the government’s control – they have a family member in the UK, someone they’ve got a connection with, someone in the community who can help them to integrate, they have perceptions from perhaps being brought up in a country that was a colony of the UK and being told that the UK is a brilliant place of rights and justice and all the rest of it, they speak English. These are the kinds of factors that are the ones that will inform peoples’ decision making.

The factors that people think might pull people simply don’t exist – for example, refugees are not allowed to work when they arrive in the UK, the Labour government took away the right to work in the early 2000s. There are very few benefits, around £35 per person per week which is less than most of us would spend going out for lunch. There are years of waiting around to find out what’s going to happen with your life, and there’s very poor accommodation while that happens, so these are not pull factors in the way that people are presenting, I don’t think. The UK is a very unattractive place to come to, and the successive governments have spent 20 years trying to make it as unattractive as possible, but people still come because they’ve got family connections and hopes and aspirations that are tied up with that really.

Could you explain how the UK’s asylum system compares with other countries?

The UK’s asylum system has changed over the years but essentially most of Europe has the same sorts of asylum systems because under international refugee law you have to set up procedures for people to be processed. The thing that’s very noticeable about the UK is that that takes a very long time in many cases but ultimately, about two thirds of people who apply for asylum get it because they have a well-founded fear of persecution. So even the government on its own terms recognises that most people who come are genuine, because about 40% of those people who are rejected but go to appeal also get granted status.

So, the asylum system is not dissimilar anywhere in Europe, probably longer waiting times in the UK than elsewhere, but the outcomes also kind of destroy this idea of people pretending to be refugees, because in the end even the government’s own officials find them to be refugees. So, there’s not much logic to that argument either unfortunately.

What would you say needs to change in the way that British and European authorities handle this issue, and how can they do more to keep migrants safe?

Well, I’ve been working on this issue for more than 30 years now and I did a lot of research around the time of the so-called ‘European migration crisis’ in 2015 and 2016, and the arguments as to what needs to be improved have not changed since then.

Basically, under international refugee law it’s not possible to claim asylum until you arrive in the country that you want to claim asylum [in]. At the moment there’s no way to apply before you get there, so what they need to do is set up very significant resettlement from countries where people are stuck in camps or otherwise not able to rebuild their lives. At the moment the numbers who are being resettled are absolutely tiny, at their lowest really for about 10 years.

There needs to be some way of enabling people to apply for asylum outside of the country where they want to go, because at the moment the UK is taking a tiny proportion of the world’s refugees and is kind of privileged by the fact that it’s on the margins of Europe but that means that people are making very dangerous journeys in order to get there.

They also need to set up possibilities of safe and legal migration channels. It’s currently incredibly difficult to get to the UK as a migrant unless you’re very well off. That’s both financially very well off, and you have good documentation, either a visa, or a passport in order to get a visa – refugees are just not in that situation.

I think also perhaps not selling arms to countries that are producing refugees might be quite a helpful thing to do as well, and not reducing the overseas development assistance budget. There’s a whole myriad of broader trade and policy things that you could do, but immediately you should look to take away the trade from the smugglers. At the moment what people are doing is creating the market for smugglers, so take away the trade by creating legal routes and then there wouldn’t be any demand for the services of smugglers, which are becoming more and more dangerous and very expensive.

Is the UK government essentially forcing refugees’ hands by limiting access via these safer and more legal routes? There seems to be a focus on reducing the number of people coming across by boat but without doing anything else to address the situation.

They’re literally not doing anything else, literally. People are always criticising refugees for being irregular or illegal or outside the system but there is no system for them to be inside You cannot get on a plane and then travel to somewhere because the airlines now have this thing called the Carriers’ Liability Act, which means that if they allow somebody to get on the plane who’s going to claim asylum, they get fined I think it’s £2,500 per person. So, unless you get on a plane with documentation to say that you’re able to go somewhere you can’t be legal, but there is no documentation to be an asylum seeker. So, it’s actually impossible to be legal, but you get punished for being illegal.

The obvious solution is to create some legal routes so that you don’t push people into that illegality, because all of the efforts at the moment are going on closing down the borders. They’re putting no resources into CCTV and guards or police and boats, and they’re not actually [monitoring issues]. The problem has been here for more than 20 years, and well before that we’re looking at the Yugoslavs crisis of the late 80s. So it’s not going away. It would be better to spend those resources and that political energy on something more long-term and sustainable. And also, just change the dialogue, because the negative public discourse around this, the political discourse, the media discourse, is not creating any possibilities of doing it differently. But it’s the politicians that are driving that discourse so that needs to change.

Why do you think there is this unwillingness from the government to actually make any meaningful changes?

Because they’ve spent 20 years pretending it’s a problem and making out it’s a bigger problem than it is because it actually detracts from other domestic issues. So, you know, nobody’s talking about what’s wrong with the health service, because they can just blame it all on migrants, nobody’s talking about what’s wrong with zero-hour contracts, because they can just blame it on the migrants etc. All of these things can just be very easily blamed on migration, and they have been for the last 20 years. But in fact, the country has been built on migration, and refugees [in the UK] are a tiny proportion of the world’s refugees and a tiny portion of the UK’s population. It’s just kind of populous rhetoric, which also detracts from other things in my view.

Is there anything you would say that the public can do to help put pressure on the government to change their attitudes towards this?

They can educate themselves. There’s a lot of information and material out there about what’s actually going on and about the experiences of refugees and why they make the journeys, and I wrote a book called Unravelling Europe’s ‘Migration Crisis’ which has just been made available by Policy Press as a free ebook. It’s not like there’s any shortage of material for people to educate themselves with. I think people need to not believe everything they read in the papers essentially, and try to find out a little bit more about what’s actually going on. 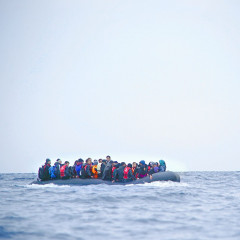 Heaven Crawley, a professor of International Migration, explains the realities that refugees are facing and how the UK government is failing to provide them with safe and legal options.