Voice MagEventsDan Kelly: How I Cam…

At: Just the Tonic @ The Caves, Venue 88, Niddry St, Edinburgh

What happens when you try to run 26.2 miles in the most secretive nation on earth?

In 2018 Dan Kelly came third in the North Korean Marathon, beating over 1,000 other runners to get on the winner’s podium.

To achieve that he had to negotiate a voluminous application and vetting process to gain access to the country. He also discovered what happens when you run out of malt loaf the night before the big race, and, what happens when you hit the wall in front of 50,000 North Koreans who are enthusiastically cheering you on. There may even have been some physical training involved too.

Dan travelled with four friends, each with their own area of specialism, meet Mark (nutrition), Tarek (communication), Martin (numbers) and Hugh (speed).

This fast-paced hour of unique, intelligently comic storytelling incorporates video from the race (official North Korean government provided footage) and real-life scenes of BBQ clams and last-minute flapjack shortages. Marvel as Dan and his team discover the answers to the burning questions of the day like:

‘How do you convert miles into kilometres…and then back into miles!?’

‘What’s North Korean for ‘is that a real gun?’’

How I Came Third in the North Korean Marathon is directed by Joseph Morpurgo, co-creator of smash-hit improvised comedy Austentatious (winner of multiple 4 and 5 star reviews) and Comedy Award nominee. See a short trailer here https://www.youtube.com/watch?v=fHvpPszCSjA&t=7s&ab_channel=DanKelly

Dan said ‘As a keen runner I’ve run marathons in places like Marrakech, Snowdonia, Madeira and Valencia but entering North Korea’s was one of the more unusual experience and was my toughest challenge yet. For a start, are flapjacks even allowed in North Korea? This show is an attempt to tell audiences about the thrills, spills and downright absurdities of running a race in the most secretive nation on earth’.

One-time Edinburgh University student Dan is no stranger to international travel. In his day job he travels the world to investigate the cost of living in different countries, checking and recording prices of day-to-day goods. If you want to know the price of a box of tea bags in Belarus or a pack of pasta in Peru, Dan’s your man. He has visited supermarkets in over 140 countries. Any unusual finds? ‘Last year, on the top shelf in a tiny, run down corner shop in Burundi I saw a very dusty, and most unexpected bottle of Newcastle Brown Ale…’ 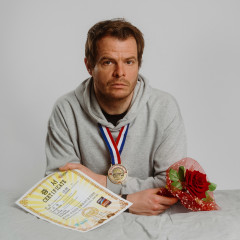 Dan Kelly: How I Came Third in the North Korean Marathon