This Hollywood star has been causing a stir in Birmingham while filming for the new Mission Impossible 7 movie (yes, apparently we do need another one of those). Cruise has been seen in Grand Central, which was turned into an Abu Dhabi airport for filming, as well as ordering two servings of chicken tikka masala at an Indian restaurant in the city centre (steady on Tom).

If Cruise was beginning to enjoy his stay in the Midlands, it was short-lived as his BMW was stolen from outside his hotel with thousands of pounds worth of the actor’s luggage inside. The car was later found in Smethwick, but his belongings are still missing.

This incident just goes to show that even an A-lister like Tom Cruise, with his helicopters and his ‘mono-tooth’, gets to experience a real brummie welcome. Being a multi-millionaire, I’m sure this loss is a drop in the water for him, but at least he got his car back - perhaps he’d like to drive over to visit Brum’s very own Church of Scientology in Moor Green?

You’d be forgiven for not knowing who Molly-Mae is, but let me catch you up. The 22-year-old first garnered fame after appearing on the fifth series of ITV’s reality show Love Island, finishing as a runner-up with fellow islander and boyfriend Tommy Fury. Hague has since cultivated a highly successful career as an influencer, with an estimated net worth of £2 million. However, this week saw a new peak in her career, as she was announced as the UK and EU Creative Director for fashion brand Pretty Little Thing.

Pretty Little Thing has seen a fair few scandals since its inception in 2012. The brand has come under fire for selling clothes for as little as 8p in its Black Friday sale, while its parent company Boohoo Group has undergone investigations of slave labour, paying its workers £3.50 per hour. While financially successful, these fast fashion brands have become prime examples of the dark side behind modern day online fashion.

At such a young age and in such a principal role, Molly-Mae now has an excellent opportunity to change Pretty Little Thing from the inside out. Her massive online following means she is indispensable to the brand, and so she can call the shots. The hope is that she isn’t just there as a figurehead who can design some pretty clothes, but could actually fight for better working conditions in the retailer’s factories, which could in time transform the fast fashion industry as a whole. This is the chance for an influencer to actually live up to their title and influence change. Hopefully Molly-Mae recognises this and is up to the task.

Header Image Credit: "Volodymyr Zelenskyy told Tom Cruise about the benefits of filming in Ukraine" by President Of Ukraine is marked with CC PDM 1.0 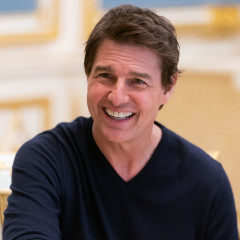