Whether it’s in films, theatres, concerts, TV shows, or even advertisements, classical music is literally everywhere and, through history, it has always been an essential part of most cultures and societies. But what makes it relevant today? Focusing on the key aspects of classical music, its development and role in society, it might be possible to think of some of the reasons why it is as important today as it ever has been.

Most of the music we enjoy today is the result of historical processes. Of course, there is a vast diversity of genres and styles, but without the exploration of concepts like dissonance, tonality, atonality and many more, music wouldn’t be as rich as we know it today. For example, during the baroque period, the use of dominant 7th chords was a very new practice. As they were considered to be dissonances, they required a special treatment. Over the next centuries, composers and musicologists would explore the concept of dissonance, and 7th dominant chords no longer needed that special treatment. Eventually, composers saw dissonance as a way to enrich music and make it even more harmonically interesting, and started to include 9th, 11th and even 13th chords in their music; the most common chords in jazz!

One of the most important characteristics to highlight about academic music is its atemporality. Unlike most music today, classical music is timeless – it doesn’t matter how many centuries have passed, we still enjoy it and many pieces are instantly recognized by everybody (think of Chopin’s nocturne Op. 9, n°2, or Beethoven’s 5th symphony). Over the years, there have been composers whose talent was underrated at the time, but who today have become renowned composers (Erik Satie is the perfect example). At the same time, there have been those who considered that their music would appeal more to future generations; and composers that changed the way we understand and make music by exploring new ideas that caused controversy in their time. A good example is Stravinsky's "The Rite of Spring". This ballet caused controversy when it first premiered. A piece that represented a rather violent society, it caused scandal in the Parisian public that attended its premiere. Today, it has become one of his most famous pieces and an example of composition techniques for most students.

Music itself is a multidisciplinary form of art. Through history, composers have been able to take elements from different areas to include them in their pieces. In the romantic period, literature and music were essential to the birth of a new genre: the Lied (“song” in german). A Lied is a piece that is typically composed for a single singer and a piano accompaniment; and its lyrics are generally poems (the most famous ones written by Goethe). Some of the most known examples belong to Schubert and Liszt, two composers that dedicated themselves to the art of the Lied and perfected its technique.

With the birth of the opera, music merged with the performing arts to give rise to a new genre that would bring together the performance of both actors and musicians.

This interdisciplinary exploration of music allowed this art and other disciplines to develop new concepts and possibilities.

When we listen to music, regardless of genre, we associate what we’re hearing to a certain moment, place or even a feeling we’ve experienced. Every sound in a piece of classical music has a context and a purpose, and they are able to move and transmit emotions. This concept of music as an element to influence emotions was developed in Ancient Greece, when philosophers like Plato and Aristotle elaborated theories about the way music influences the soul. In the renaissance/baroque period, a similar idea would be further developed. Compositions that included both lyrics and music, would use techniques like madrigalism or "text painting", where the music serves to the dramatic demands of the lyrics to transmit emotions.

Through time, academic music has been the space for exploration and development of ideas that contributed to create music as we know it today. The fact that we have unforgettable pieces that come from centuries ago, speaks of its impact in history. More subjectively, it’s its ability to transmit emotions that simply impacts us as humans.

While it’s important to reflect on what makes classical music so special, it’s equally important that we keep, play, share, appreciate and learn from this gem of history for future generations. 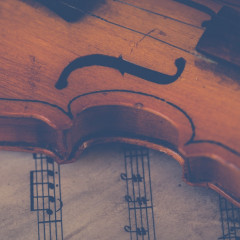