Filmed on protected terrain in Northwestern America, The Invitation invites viewers into an otherworldly natural scene. We watch a lone woman traverse a forest, discovering colourful mandala flowers before she becomes consumed by one, turning into an anthropomorphic figure with horns and fur who dances around the forest at night.

The film was created by Degenerate Art Ensemble, who are known for large scale dance and theater projects, concerts, site-transforming spectacles and ongoing public experimentation. Haruko Crow Nishimura, the co-director of the organisation, is the mastermind behind The Invitation. The concept for the film was born from the pandemic, and it reflects on ‘the ancient practices that all human societies have used to stay connected to our environment and allow us to embody the spirits of unseen realms’.

Nishimura’s choreography involves exaggeratedly slow movements, and as we watch the woman interacting with the scene around her, the message seems to be that as humans we should be considerate about how we react to and exist alongside nature. With no dialogue and eerie choral background music, the natural visuals are the focus of the film. Certainly, the horned faceless figure the woman transforms into provides the most striking visual as it dances under a full moon. Its emergence into the sunlight closes the 13 minute film, suggesting that the woman’s human form no longer exists.

The quality production and distinctive visuals make The Invitation one of Unfix Festival’s must-see events.

For more live and on-demand performances and discussions on the topic of ecology, you can find Unfix Festival’s events programme here. 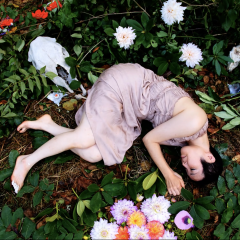