‘Stunt casting’ is a term used in theatre that refers to the use of a gimmick or publicity stunt to fill a role in a production. Stunt casting is generally used to generate media attention and ensure tickets are sold, with the most common type of stunt casting being casting celebrities who have little or absolutely no previous experience in theatre.

Over the past decade, with the rise of social media, this has been rapidly increasing, especially on Broadway and the West End, with some recent examples including Brendon Urie in Kinky Boots, Tanya Burr in Confidence, Bianca Del Rio in Everybody’s Talking About Jamie and countless C-list celebrities being cast in Waitress.

Whilst some of these celebrities are undoubtedly talented and admittedly, I would have sold my soul to have been able to see Brendon Urie on Broadway, I can’t help but question whether these celebrity casting choices are somewhat problematic. At the end of the day when a celebrity is cast in a production it takes a role away from new talented actors, who have usually worked 10 times harder to secure roles which are a fraction of the size of these celebrities’. With over 50% of equity members living below the poverty line, surely casting directors and producers should have a responsibility to offer roles to these actors, who’d otherwise find themselves unemployed, over celebrities who live an affluent lifestyle without having to use theatre as an income.

Ignoring the fact that stunt casting may be ethically questionable, it may also result in disappointment for audience members. This may be because these celebrities don’t anticipate the extremely rigorous and demanding routine of actors working in theatre and simply aren’t able to keep up with the lifestyle. One example of this was in 2011 when Amanda Holden was cast as Princess Fiona in Shrek the Musical. She disappointed hundreds of fans, many of whom had spent close to £500 on tickets, travel and accommodation, when she withdrew from the musical early, missing many performances. However, I’m sure we can agree that stunt casting is more excusable when the celebrity in question is fit for the role, such as Brendon Urie, who is known for his incredible voice, or Joe Sugg, who proved his dancing abilities on Strictly, yet with many of these casting choices, this simply isn’t the case. For example, Confidence at Southwark Playhouse received countless poor reviews, such as 2 stars from the Guardian and WhatsOnStage and a 1 star from the Times, all of which also picked up on Tanya Burr’s questionable acting.

However, I feel that people are extremely quick to dismiss celebrities who have been cast in productions, without knowing their abilities, simply because they haven’t trained in theatre, when in reality there are many actors out there, such as Nicole Raquel Dennis and Carrie Hope Fletcher, who in my opinion are two of the most talented West End actresses of our time, who also haven’t trained in theatre and have still been able to make a mark on the industry. However, in my opinion, the main positive of stunt casting is the diversity that it is able to bring to the theatre.  A study on theatregoers showed that the largest group of theatre audiences were white women between the ages of 65 and 74, with the average age of an audience member being 52. It suggested that the average age is set to increase considerably over the next 10 years if productions don’t make an effort to reach out to different audiences. Casting celebrities in these roles largely attract a younger demographic to the theatre, which when we know the benefits of theatre, such as improving vocabulary, increasing creativity, possibly fostering a love for the arts and bringing communities together, can surely be nothing but a good thing.

Overall, I think that there are many different arguments for and against stunt casting and it completely depends on the situation. I believe it would be wrong for a show that already draws in a large audience and lots of money, to cast a celebrity in a role, simply for the reason that they are a celebrity, when a lesser known actor would be able to do the role justice. Although, one has to bear in mind that when a show closes every cast member is put out of work, so if the casting of one celebrity can help to sell tickets and keep a show open for everybody, as well as attract a larger audience to the theatre, surely that’s a good thing? 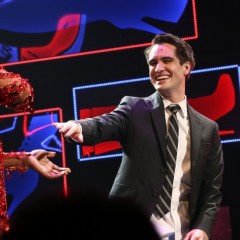 Is Stunt Casting in Theatre Ever Okay?