The seven-part miniseries Hollywood, created by Ryan Murphy and Ian Brennan, is set in 1947 Hollywood. This was a time which brought rapid change to the film industry, particularly with the introduction of antitrust legislation, which meant major studios’ films weren’t guaranteed to be shown in theatres and brought an end to the “old Hollywood”.

The show begins with Army veteran and aspiring actor Jack Castello (David Cornswet) working at a gas station, whilst also sleeping with clients who use the codeword ‘Dreamland’. As the story progresses and Jack makes his way into the industry, we are introduced to our other protagonists who, like Jack, are all aspiring to make it big in Hollywood.

The narrative revolves around the production of a film based on the life of Peg Entwistle, a real actress who took her own life by jumping off the Hollywood sign. The film’s team is made up of a group of diverse Hollywood wannabes, including a black and gay screenwriter, Archie Coleman (Jeremy Pope), a half-Filipino director, Raymond Ainsley (Darren Criss) and a black female lead, Camille Washington (Laura Harrier). Initially, all characters face abuse and hardship, however, instead of portraying the story as it likely would have occurred, at a time where segregation was not yet abolished and homosexuality was still criminalised, Murphy reimagines the story and tells us how it could have been. We enter a counterfactual history of Hollywood, and in my opinion, this is where the show begins to fall apart.

Whilst, Murphy’s intentions were clearly to present film as capable of changing the world, as well as giving us an idea of what the film industry might look like if the views of 1940s Hollywood had progressed more, to me it came off as reductionist, and even slightly cruel. The show seems to suggest that the discrimination of post-war Hollywood could have been diluted if those marginalised had taken a harsher stance against their oppressors. I feel the show could have been more effective by presenting the undeniable corruption and prejudice of the film industry, and drawing parallels to the modern-day film industry, instead of creating a fantasy that diminishes it.

That’s not to say I didn’t adore certain aspects of the show. For me, the highlights of the series were the aspects which were at least somewhat true. I loved the presentation of Ernie’s gas station, which was based on the real-life gas station run by pimp Scotty Bowers. I think the scenes at the gas station really captured Jack’s insatiable desire for success and his willingness to sacrifice his morality for a smidge of recognition in Hollywood. I also loved George Cukor’s pool party, which gave us insight into the culture of Hollywood as well as a glimpse of its corruption, and provided us with cameos of the infamous Vivien Leigh, Noel Coward and Tallulah Bankhead. Clearly, there is an overflowing amount of fascinating and shocking material that Murphy had to work with, and I feel it would have been more effective to delve into this material, rather than show short bursts of exposé.

Acting-wise, the series has no stragglers. For me, the stars of the series are Jim Parsons, who plays Henry Willson, and Jeremy Pope, who plays Archie Coleman. At no fault of the actors, it felt as though some characters in the series, particularly Criss’s, were underdeveloped, and for me, Parsons and Pope placed the most purpose behind their character’s movements and expressions. Parsons is mesmerising to watch and completely effective in presenting Willson as fundamentally detestable and Pope’s monologue about being a black writer telling a white narrative can’t help but make you teary-eyed.

Aesthetically, Hollywood is completely beautiful. Murphy’s direction combines vibrant mise-en-scène with symmetrical framing and adds to the magical aura associated with Hollywood. If escapism is what you’re after, the series will absolutely be able to transport you into the fascinating world of the 1940s film industry. However, the series’ narrative falls slightly flat and fails to achieve the poignant message that it was hoping for. 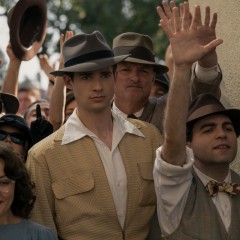