After Trump's inauguration last year I was despondent with the state of the world. The Women's Marches inspired me to take up the mantle of doing something to combat the pervading misogyny and racism of the right-wing politics which had gripped the West. As as lifelong book-lover and a recent English graduate hankering after my days spent reading as 'studying', I naturally turned to books. I started 'Feminist February' on my blog as a challenge in which I would read exclusively intersectional feminist fiction.

This was in part a response to my lack of education on the subject - despite four years of university, I only really encountered and engaged with feminism in the very last piece of work of my final year. I had spent four years reading fiction by almost exclusively white, straight and British/American men and I felt I needed to catch up on everything I'd missed and make my reading more diverse.

Feminist February was never intended to be a huge, world changing form of activism but in its own small way it has changed my world. I know and understand so much more than I did before this challenge, and that's why I decided to do it for a second year.

As long as the books aren't too long, if I focus on reading I can get through two in a week. This has led to my weekly updates being quite interesting explorations of two, often very different books. One of my favorite exercises with this is something I have called 'critical linking' where I look at the common themes between the books. It is very rare that there aren't any at all and this has helped me to think about what I'm reading in different ways. For example last year I read The Handmaid's Tale alongside Stay With Me, which was longlisted for the Women's Prize and this was quite simple as they both clearly dealt with issues of infertility, pregnancy and motherhood. In a different week I read Angela Carter's The Bloody Chamber with the first volume of the new Ms Marvel comics, this was much harder as they were very different reads, but both were redefining their respective genres, both dealt with supernatural depictions of women's bodies and ideas of 'shapeshifting' which is really interesting.

I'm a self-professed literature nerd so of course I find this deeper analysis really interesting, but I realise it isn't for everyone. However, that's the best thing about setting a challenge like this - you can tailor it to you, even if it is one book you look at. I read a range of fiction, non-fiction and essays - however some people might want to just focus on one area, whether they prefer novels or have decided to read something different. You can use it as an opportunity to read the classics which set the scene for modern feminism, or to widen your views on current issues. Nothing is the wrong way of doing it.

That being said I do recommend trying to be intersectional in your approach. Whatever your gender, racial and sexual identities there are always stories of other people with different experiences in the world. I have tried to read more work by women of colour and those who identify as LGBT+, and it is these stories which I have learned the most from.

Feminist February started as a personal challenge but last year and this year I've had a handful of people participating in it, from friends to strangers online. It has been a great tool to expand my blog and build up more of a following and I hope the people who have kept up with my challenge or started their own have taken something positive from it.

After all, books, reading and literature are some of the most common themes and symbols to resistance, freedom and liberal politics throughout history, so I suppose it makes sense that if you want to make the world a better place, the simplest way to start is by reading a book! 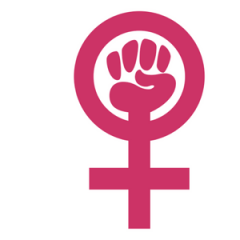