Two weeks have passed since the 2018 Golden Globe Awards, but the buzz surrounding them hasn’t yet come close to fading. If you failed to watch the awards, or look at a single news outlet for the surrounding two-week period, then you may have missed the plethora of celebrities using the event as an opportunity to speak out. Countless actors and actresses, dressed in black, wearing #TimesUp pins, and of course unfailingly tweeting about it. This new type of ‘activism’ is all well and good, until you start considering the consequences, or rather, the lack thereof.

One of the most talked-of aspects of the awards was the fact that many actors and actresses came dressed in black as a statement against the outbreak of sexual harassment cases flooding Hollywood. Eva Longoria, Reese Witherspoon, Gal Gadot, even The Rock – it was shown as a touching gesture demonstrating the solidarity in the acting community. Yes, of course this is a fantastic sentiment, and yes, of course this kind of controversy can breed action in many cases.

I have come to believe that this is not one of these cases.

My worry is that celebrities have started to view the need for real activism as simply an opportunity to market themselves further. To put themselves even closer to the gaze of the public eye, with no intention of following their sentiments through. To reiterate, I’m not denying the poignancy of the occasion, nor that many of these celebrities are acting with an honourable intention. I only mean to bring to light the fact that for some, it’s nothing more than an empty gesture.

For example, take Justin Timberlake, wearing a #TimesUp pin, and making sure all of his 65m Twitter followers know about it. Yet only last year he worked on a movie with Woody Allen,who has been accused of multiple counts of sexual assault by his adopted daughter.

This is a dangerous game to play, because it lulls everybody (fans, viewers, social media users, the general public) into a false sense of ‘activist security’. This type of high-powered mega-celebrity leads people to assume that something more is being done behind the scenes. Of course, more may well be underway, but if it is, then why are the public not made aware? Thrusting the issue into the public sphere is what started this movement in the first place, the solution is not to then work on it under a veil of secrecy.

Whilst the cause is being promoted to more mainstream audiences and media (which is arguably activism in itself), the iceberg is barely being tipped. What we need is physical tangible reform, like laws, and guidelines, and manifestos. We need conversation, but we need the conversation to extend further than one glittery event, where controversy is little more than a convenient tool to reel in media coverage.

And as with all controversial events, social media becomes a (still ultimately useless) maelstrom of argument. Millions of people jostled to voice their opinion on any platform they could, with views ranging from fervent admiration to scathing cynicism, which brings us to another problem; many users assume that making their views clear online is ample involvement for the entire issue. This obviously is not the case. Whilst Twitter might well be an extremely convenient and useful tool for growing, shaping and sharing your opinion, expressing that opinion in 240 characters or less is not going to cut it in terms of ‘action’.

The one and only exception to most critics’ jibes was the wonderful Oprah Winfrey, and the speech she made upon being presented with the Cecil B. DeMille Award. Dressed in black, but somehow still standing out from the crowd, she was poised, and elegant – deserving of respect in every way. She directly addressed the racism and sexism still underlying the industry, and pushed for what she called a ‘new day on the horizon’, whilst the whole room crackled with energy and and emotion. I myself have watched the speech no less than 4 times, and have shed a tear or two on every occasion. Why is this any different, you ask? Because she’s demanding change, rather than skirting around the topic and simply following a herd mentality. She’s stimulating debate and discussion in a different, more dignified manner, and I have no doubt at all that she will follow the speech with the appropriate action.

So what can we do now? Individually, nothing – we hold power only collectively. By all means, talk on Twitter, argue with out-of-touch grandparents, all the usual methods still apply. But don’t forget that whilst it’s a start, it does not necessarily equate with action, or at least, the kind of action which we need. Sign petitions, and campaign for change, and attend marches, and use your vote (if you can)! Your voice can be louder than you think. Maybe then, we’ll see some real action. 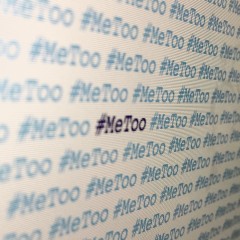