Voice MagBlogsBoys in the performi…

At an amateur level performing arts is a largely female dominated world. Girls are encouraged from a very young age to attend ballet classes and tend to be more interested in drama at school, this certainly applied to me. I went to ballet, tap and modern dance classes when I was very young, joined another dance group a little later on and then got involved with amateur dramatics at the age of about ten. From there, there was no stopping me and my passion for acting has grown and grown to the point where I am now pursuing a career in theatre. But in all this time the vast majority of people surrounding me have been girls and, as I've started to become a little more self-aware, I've begun to think about why this might be. Your first reaction when reading this might be 'well of course there are more girls, it's just a girly thing', but that's not true. At a professional level there are countless professional male singers, dancers and actors. Furthermore, theatre started off as an exclusively male world in ancient Greece and this trend continued in Elizabethan theatre. Yet modern society seems to have a different opinion.

When starting my research into this issue I mapped out a few possible reasons I thought could be the cause for the large gender gap. I believed that one of the main reasons for this could be that some young boys experience bullying as a result of being involved with the performing arts world as it is wrongly perceived as solely feminine. This would cause them to give up interest and act as a deterrent for other boys. This would fit seeing as our society does have a history of enforcing stereotypical ideas about masculinity onto children at a young age through films and the media dismissing those who don't quite fit in. I do have some grounds for this assumption as a boy I knew at secondary school got teased for being the only boy in our year to take dance GCSE. So whether it be bullying or delicate peer pressure, there are subtle ways that kids can make others feel uncomfortable about doing something different.

However, like any good investigator, I wanted to back up my hypothesis. So, I asked a few guys I know, all at different stages in the performing arts, to get their take on the issue. On the topic of negative social responses specifically my findings were pleasantly surprising. All four of the guys I asked said that they'd never experienced bullying personally as a result of performing and only one said that they'd known it happen to someone they knew. I was surprised by this but on reflection I shouldn't have been. Our society has been making really positive steps towards being more accepting and supportive over the last decade or so and it therefore makes sense that fewer young boys in performing arts are dissuaded from it. I suspect however that there are a few instances where this is still the case and it's the responsibility of practitioners and teachers to spot this and stamp it out.

Another thought I had as to the reason for the gender gap was a slightly more subtle one. The people to blame may be parents and teachers unconsciously imprinting a certain idea into children's heads about what it means to be a boy, such as automatically dressing a boy in blue baby-grows or giving them a football to play with. So I asked the guys if their families were supportive. They all said yes absolutely! Either this is typical of most families, in which case it is most likely not family influence that keeps boys out of the performing arts, or this is not typical. This would highlight the importance of a family's enthusiasm in helping boys successfully pursue performing.

At this point I realised something. Once boys get into the performing arts world, there doesn't seem to be an overwhelming reason for them to be pushed out. This means that the problem is getting them in in the first place. So I asked the group a crucial question. 'Do you think it's important for more young boys to get involved with performing arts?' The overwhelming answer was yes. Three out of four of them were keen for more guys to have the experiences that they've had. The fourth made a very important comment that no one should be forced into activities that they didn't want to do which of course is a consideration. But the consensus seems to be that an effort needs to be made to introduce a larger number of boys to the performing arts.

But how do we go about doing this? To get a different perspective I sent a few similar questions to the woman who runs the drama school that I used to be a part of. She has had years of experience in the industry so I thought that her insight would be very valuable. A lot of what she said was in line with what I had already heard from the boys. She agreed that there is a very noticeable gender gap and that it is about time this changed. She insightfully suggested that performing arts be made part of the mandatory curriculum even earlier than it already is. Primary school teachers should be introducing young children to the benefits of the subject at a time when implicit social laws have yet to convince boys that it isn't masculine. This way, by the time music, drama and dance is taught at secondary schools and GCSE choices have to be made, boys have already had some exposure to it and can then seriously consider it as something they want to pursue rather than automatically disregarding it.

It is also important that teachers know how to reach out to boys and entice them in the most effective ways. One of the lads that I spoke to mentioned the effectiveness of musicals such as Hamilton at engaging a slightly different, more modern audience due to its hiphop genre. I also know that The Mercury Theatre run a summer school that looks at combing technology with theatre and they get an equal number of girls and boys, even though they make a specific effort for the advertising to reach more girls. These factors suggest that the way to get boys in is to look at interests that are typically considered more 'boyish' as they might be less reluctant to consider performing arts based hobbies.

So, more opportunities must be made for boys to join the performing arts without feeling emasculated. One theatre company that has taken steps to make this happen is Frantic Assembly who run a programme solely for males between the age of 16 and 20 called Ignition. Programmes such as this will hopefully help those who are interested in giving performing a go but are slightly reluctant because of how it may be received. This way they will be around like minded people.

But is this an important issue? The performing arts industry is one that I'm very invested in and has given me so much in the way of self-confidence; I would hate for anyone to miss out on the opportunities that I've had because of something as basic and involuntary as their gender and I know performing has had a similarly positive impact on the guys that I interviewed. But for anyone doubting the importance of performing as a hobby in the first place, such as intrigued parents, there is an increasing understanding that amateur dramatics has enormous benefits on an individual's ability to perform well in the work place, interviews and presentations because they will be a lot more comfortable speaking publically. Furthermore, in a study conducted by Mckinsey & Company about which sectors are most susceptible to machines taking over from humans, the arts, entertainment and recreation sector had a consistently low susceptibility meaning that, although it is an incredibly competitive industry for the individual, performing arts has undeniable importance and stability as a whole.

One key factor here is the perception that a) boys must not partake in 'femanine' activities and b) that performing arts is not 'masculine'. I use inverted commas here because the discussion about masculinity and femininity is a complicated one and cannot be summed up in a short article. However the implication of the discussion is crucial to solving this issue as people must stop being concerned with whether their actions are perceived in a certain way and just follow the hobbies that interest them and teachers and practitioners should make an effort to reach out to more boys.

This issue is a small part of a much larger initiative to bring more diversity and originality into theatre. How else can you hope to produce the highest quality, most imaginative performances if you're not utilising the incredible diversity hat humaity has to offer? To conclude, even if they ultimately decide it's not for them, it is imperative that more boys are given exposure to the performing arts as there is nothing to lose but much to gain. 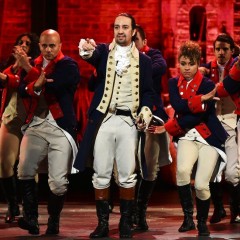 Boys in the performing arts