An outline of my experience as part of the team selecting the shortlisted museums for this year's Family Friendly Awards.

On Friday 9th June, a group of roughly 15 people got together to put together a shortlist of ten museums from over 700 that had been nominated for this year's Family Friendly Museum Award. I had the opportunity to take part in the shortlisting as a representative of Arts Award and Voice, and was thrilled to see how many museums have made Arts Award Discover a permanent part of their programme.

Anyone can put forward a museum, or they can enter themselves, and they can send in examples of the work they are doing to reflect their local communities and work alongside them. There is an eight point 'mini manifesto' to help highlight to the museums what they should be striving for to be in with a chance of being one of the ten museums shortlisted for the award.

The shortlisting day began with us pairing off and each tackling a table of nominations for fifteen minutes, before rotating to the next table. We read through the entries and then had to place them in yes, no, or maybe piles. Once every pair had gone through each table once, we did a second round of five minutes at each table, checking through any maybe's and having the chance to save any that had ended up in the no pile. This showed a clear conflict over several of the museums as they moved continuously between the yes and maybe piles.

After lunch, we had a group discussion to whittle down the remaining yes and maybe piles to our ten shortlisted museums, as well as each having a chance to save one museum we felt strongly for that had not made it into one of these piles. This became a lively discussion which had to end in some harsh decision making to finalise our top ten. The shortlisted museums are:

Each museum met all eight of the 'mini manifesto' points and showed that they were going above and beyond to accommodate everyone and work alongside their local community. Every museum has taken a different approach to fulfilling this task, but all include programmes that could easily be implemented in many other museums nationwide to create a more enriching experience for families.

To decide the winner of the Family Friendly Museum Award 2017, families will get the chance to visit the shortlisted museums anonymously over the summer (as many as they wish) and can then give feedback on each one they see and how their work matches up to the 'mini manifesto'. Do you know any families who would like to be undercover museum judges and help pick the winner? If so, email [email protected]

In my opinion, this is the best way to test such a community centred award, as after all, it is about the families and the communities visiting these museums and about how museums can reach out to more people and make their attraction more accessible to a variety of people.

I had a fascinating time working on the shortlisting with many Kids in Museums staff and volunteers, and I definitely learned a lot. I did feel slightly at a disadvantage when I discovered I was one of only a small handful of people who had not done the shortlisting before and hadn't worked alongside Kids in Museums in any way over the last few years, but I generally felt included in the process and that my opinion was relevant. Although I feel that the final decision of the shortlisting was driven by those with the most knowledge of the museums, I cannot deny that without their knowledge or expertise we may have gone round in circles for many more hours trying to come to a decision.

Kids in Museums are doing amazing work getting museums across the country to make their exhibitions and their public areas more user and family friendly, and it is very clear to see the impact they are having. The Family Friendly Award is also giving many much smaller museums the recognition they deserve for all the work they are putting in to making their (often volunteer–run) museums more accessible and captivating, especially for younger children.

I would highly recommend visiting these shortlisted museums, and see for yourself the amazing work they have been doing. Don't forget, you could always nominate your local museum for the work they are doing when next year's awards open! 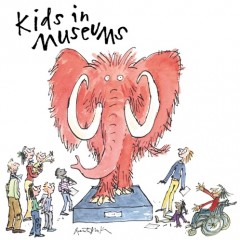 An outline of my experience as part of the team selecting the shortlisted museums for this year's Family Friendly Awards.