This event featured 'suspense' novelists Sam Baker, author of The Woman Who Ran, and Susie Steiner, author of Missing, Presumed. I was incredibly keen on this talk as I am doing work around the idea of the 'domestic noir' or women's thrillers, and I was very excited that chair Stephanie Merritt brought this up almost immediately, asking the two writers if they were conscious of writing in this tradition. Both surprisingly responded that they weren't, actually focusing far more on writers or works which inspired them. For Baker this was the Bronte's and particularly The Tenant of Wildfell Hall which her novel is a reworking of. Steiner didn't recognise her novel as a 'police procedural' as much as saying she took inspiration from Kate Atkinson and 'cherry picked' what she wanted to use. However, both were conscious of crime as a genre commenting that it has a 'momentum of its own'.

The novelists talk a little of their own novels, with Baker's being a modernisation of the Victorian classic, exploring similar themes through a modern lens, with a focus on domestic violence, or what she prefers to call 'relationship abuse' to cover the more psychological and emotional aspects too. Stiener points towards the struggles of her main character, arguing that suspense doesn't only happen in a thrilling sense when you are expecting danger or violence, but also in relationships, when you are waiting to see if a character will fall in love for example.

The direction of discussion refers back to the typical genre, and the protagonists usually being dysfunctional male detectives (think Wallander) though Steiner is keen to assert that her detective is not the female equivalent telling us, 'she is ordinary, not dysfunctional'. Baker adds to this saying that typically women either have to be victims or 'strong female characters' and that this provides them the opportunity to just be realistic, a really interesting view on a controversial subject.

Both novelists did extensive amounts of research, previously having been journalists this is clearly something that comes naturally to them. Steiner spent time with Cambridgeshire police department in developing her novel and learning about the specific procedure of the Major Crime Unit, while Baker recalls a hilarious moment she began calling around to ask people 'at what temperature would a body burn so there is not DNA left?' but forgetting to explain why.

In hearing the readings it is evident that they have a very different style, despite writing within the same genre. They both take different approaches to writing too but emphasise that in building suspense it is the revision process that is important, taking away obvious references and adding subtle clues.

This talk was hugely exciting for me, as a huge fan of The Tenant of Wildfell Hall and with a deep interest in this genre and what different authors might be doing, I am keen to make a start on these to exciting novels, and the talk itself was incredibly interesting in looking at a very current popular genre. 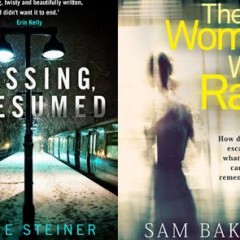