After it had seemed the negotiations might be forever in gridlock due to international disagreements on issues of climate finance, the commitment to 1.5 degrees, and the use of fossil fuels, the Conference finally ended on Sunday morning. Even if we can’t exactly say a consensus has been reached, almost 200 countries have signed an agreement on “loss and damage,” something that had featured heavily on Egypt’s agenda.

The “Loss and Damage fund”

One major sticking point in the negotiations was the role China and other emerging countries are to have in this fund. It is now agreed that these countries are not currently required to contribute, but they likely will be required to do so in the future.

This agreement for a “loss and damage fund” will form a “transitional committee” containing 24 national representatives. From now until COP 28 in the United Arab Emirates, this committee will be responsible for organising how the fund will work, as well as which countries will be taking part, a detail that is still unclear.

Commitment to staying below 1.5 degrees of global warming

Despite the progress made with last year’s Glasgow Climate Pact and the latest warnings from scientists that 1.5°C is the line in the sand we mustn’t cross, commitment to the Paris Agreements “preferable” global temperature rise seemed to wane at this summit. India and China now believe that 1.5 degrees is no longer possible, a stance that possibly contributed to there being no new pledge (or even re-iteration of the one from Glasgow) for keeping to 1.5.

Instead, there was a concerning amount of “backtracking” at COP 27, with many discussions focusing more on the Paris Agreement’s upper limit of 2°C than on the critical 1.5°C that will prevent the destruction of our planet.

The use of fossil fuels was no less divisive this year than at COP 26, with countries on both sides of the debate seeking a change in the language used around the topic. As before, the more developed nations are much keener to “phase out” fossil fuels than developing nations such as India are. At COP 26, it was agreed that coal use would be “phased down” instead, a key difference allowing fossil fuels to still be in use.

It almost seems COP 27 has reverted to a pre-COP 26 stance on energy use (a change usually blamed on the global energy crisis). The final COP 27 agreement has seen the introduction of the phrase “low emissions energy” as an alternate option to “renewable energy.” The use of “low emissions” fuels to help the environment is a dangerous proposition, as fossil fuels such as natural gas could easily be considered as “low emissions,” providing governments with yet another loophole allowing them to delay the implementation of renewable energy sources such as solar and wind power.

The "loss and damage fund", although historic, has been the only major achievement of the summit. And we are yet to see whether action on this fund will be followed through, or if it will have the same fate as the never-seen $100 billion fund promised in 2009. We have seen the signing of a historic agreement and a focus on mitigating the effects of climate change. However, COP 27 has failed to address the greatest cause of global warming: greenhouse gas emissions. And with COP 28 set to be held in United Arab Emirates, those emissions are unlikely to be taking a downward turn due to political action any time soon. 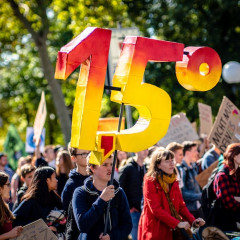