All across the country, the cost-of-living crisis is weighing heavy on the shoulders of the nation. With political upheaval rife and constant threats of rising electricity bills sweeping people’s hearts with fears for the future, the upcoming winter months are looming an ugly shadow.

Beyond concerns over heating a home, many people are concerned about simply finding one to live in. A recent housing crisis in the city of Durham has exemplified the struggles of these uncertain times, threatening the safety and security of young people living away from home for the first time.

Over the last month, Durham University students have been plunged into chaos thanks to the private renting market. Students queued overnight in the biting October weather simply to wait for estate agents to open. That meant hundreds upon hundreds of desperate students camped out in the rain and cold for estate agents to release housing lists for the signing of leases. Most students never got the chance to view the house for which they were signing a lease. Moreover, rent prices have increased exponentially, such as one particular property rising from £89 per week to £189 per week.

Not only have rents accelerated and signing leases become a mad bid for survival of the fittest, so too have letting agents released properties earlier than ever before. This means that first-year students were forced to choose their future housemates after only knowing each other for two weeks. As such, the impact of the housing crisis will stretch far beyond the immediate future, causing social and mental health issues right into June 2024, when current freshers will still be living with the housemates they chose last week.

Students and local residents alike are blaming the university. The student union reported an additional intake of several thousand students for this academic year. Surely the responsibility for housing students in an unknown city falls to the university which accepts their applications?

Durham University states that it has “engaged in a dialogue” with letting agents, but for many students, the damage is already done. Beyond that, local residents are feeling priced out of their own homes, with the rise in student populations creating hostility between the two groups. Yet they are united in their anger towards the private letting market for the lack of concern shown for students, alongside their careless leasing policies.

As such, a protest was organised to demonstrate against these practices, with dozens of university students and staff gathering to show their discontent with the lack of action taken by the university and the council. The City of Durham Parish Council released a statement to say, "This issue is caused primarily as a result of landlords releasing their properties into the market almost immediately and the University’s obsession with an unsustainable expansion policy, which is driving permanent long-term residents out of the City."

With panic more infectious than ever before, we must question which other cities will suffer the fate of Durham University. As bills continue to rise and panic grows ever more invasive, who else will be left out in the cold next winter? 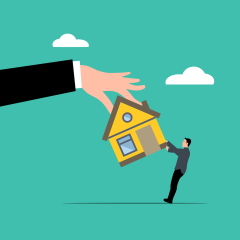