Voice MagBlogsCOP 27: is it too li…

COP 27 is the 27th “Conference of the Parties” (the “parties” are those who’ve signed the UN’s Climate Change Framework). It is a major event in the climate politics calendar, yet this raises a question: as possibly the most influential global event for reducing the effects of climate change, are these conferences making the difference we need? To begin, let’s start with perhaps one of the most influential pledges to emerge from a Conference: The Paris Agreement from COP 21 (2015).

So what is The Paris Agreement?

The Paris Agreement is a UN pledge which is now signed by every country in the world except Iraq and Yemen. It aims to limit global temperature increase to 2°C (preferably 1.5°C) above pre-industrial levels using economic and social change. Countries put forward NDCs (Nationally Determined Contributions) and then try to meet them.

Can we meet The Paris Agreement?

As of 2022 there is not a single country on track to meet The Paris Agreement. Temperatures are already over 1°C above pre-industrial levels, with this year’s extreme weather breaking new records.

To meet The Paris Agreement global emissions must fall by 45% by 2030. However China, one of the three biggest CO2 emitters in the world, isn’t even trying to decrease its emissions, with its best pledge so far being to peak its emissions in 2030: a devastating target that it’s currently still unlikely to meet.

But hope is not lost yet. If world governments go above and beyond their current policies, including getting global emissions to net zero by 2050, we might have a chance. Countries accounting for 80% of the global population have pledged to reach the required net zero carbon emissions by 2050. However, only 6% of these countries backed up their pledge with adequate domestic policies and interim targets.

What can the COP summits do?

COP summits have produced limited change so far because all COP agreements and pledges (including The Paris Agreement and last year’s Glasgow Climate Pact) aren’t treaties. As a result they are not legally binding.

Many countries are able to readily sign The Paris Agreement and provide ambitious NDCs because of the nature of the COP agreements. Nations and companies cannot be sued or have any charge brought against them for violating the agreement: politicians can easily use such pledges to gain votes without having to deliver on their promises.

It is this lack of legal accountability that has resulted in the COP summits failing to deliver a decrease in global carbon dioxide emissions, with them instead rising by 60% since the COP conferences began in 1992.

However, politicians are not to be held entirely unaccountable: there may be opportunity for enforcement using local and national law. As of November 2022, over 2200 lawsuits are currently filed worldwide against governments regarding climate change.

What was pledged at COP 26?

Mitigation was focused on at last year’s summit. There was the Glasgow Climate Pact and its target to reduce carbon emissions by 45% by 2030 as well as revising NDCs (the five-year targets) at COP 27 in 2022 rather than in 2025. GFANZ network (the Glasgow Financial Alliance for Net Zero) was also established. As good as this sounds, though, the agreements from COP 26 would limit global temperature increase to 1.9°C, which is still too high. And that’s if these promises, widely considered ambitious, are fulfilled.

What are the goals for COP 27?

According to the official COP 27 website, the goals for COP 27 include “global...action on adaption”  to the new extreme weather events and rising global temperatures. “Enhanced transparency of finance flows” also featured on the list. Maybe this summit will result in the $100 billion a year that developed countries promised as a climate fund to help developing and emerging countries in 2009 finally being fulfilled...

There is a possibility of a $1 trillion a year climate finance fund from 2025, so that might also be on the agenda. This would be an important step forward in developed countries taking responsibility for the effect of our actions on the climate. The goals for this summit also mention the need to up-scale our current solutions and turn pledges into reality. Simon Stiell, executive secretary of UN Climate Change, called this the “era of implementation.” Let’s just hope he’s right.

This year the COP 27 summit is bound to be a little different, but whether the global energy crisis caused by Russia’s invasion of Ukraine will result in more pledges for sustainable energy, or more stalling, we are yet to see. Even if the COP summits are just lip service to sustainability, at least politicians and companies are reminded of its criticality, right? 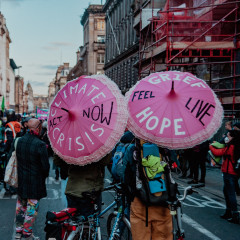