Around 30 years ago, America had the solution to climate change in the palm of their hands, but someone decided to put a spanner in the works.

It all began in 1977 with environmental activist Rafe Pomerance, when he was going through environmental reports. He read that if the levels of CO2 in the atmosphere continue to increase at the rate they were at the time, the environment could become completely destabilised. Rafe was confused as to why nobody was talking about this, so he called Dr. Gordon McDonald and a group of scientists known to many as the Jason’s. They did a peer review of the study that Rafe had seen and concluded that it was correct and CO2 could become a really big problem. By 1979, Rafe managed to get his point to the desk of President Jimmy Carter. President Carter gathered the best of the best from NASA, Dr. Jules Chaney and Dr. James Hansen, and did another report and together they compiled the Charney Report. Their report basically confirmed everything that Rafe had read: climate change has the potential to destroy the environment.

The increasing attention to climate change was beginning to worry big oil and gas companies like Exxon Mobil. Formerly known as Humble Oil, Exxon Mobil had known about climate change since 1957 as they did similar research 20 years prior to Rafe and NASA, and found that CO2 had the potential to ruin the environment. Ever since they made the discovery, Exxon’s top science advisors continued to remind them of the realities of the greenhouse effect. This included a “special” board meeting in July 1977 when Dr. James Black explicitly warned Exxon executives of the impending danger of climate change.

Back in 1979, Exxon was becoming increasingly concerned about the Charney Report as they believed it would lead to laws being changed in an effort to help the environment that could also negatively impact their business model. Exxon executives decided that the company would become the world’s leading climate change science research team and hired climate scientists from across the globe to help them conduct further research into climate change. They were very successful and were doing cutting-edge research for the time, for example, they retrofitted an oil tanker to take atmospheric samples from around the world.

In 1980 Ronald Regan became the President of the United States and his first order of business was to roll back environmental regulations and hire a fossil-fuel-friendly EPA administrator. In 1981 Al Gore, working in the House of Representatives at the time, realised that in order for people to care more about climate change, he needed to give it a story. Gore’s story put Dr. James Hansen of NASA in the hot seat at a congressional hearing. The hearing went very well for Gore and the press covered it so extensively that Exxon then wanted to pivot away from oil and try to switch over to producing more sustainable sources of energy.

In 1983, a 496-page governmental report called ‘Changing Climate’ was published and in summary, the report said that ‘urgent action’ was needed, as was ‘more research’.

Unfortunately, President Ronald Reagan only read the ‘more research needed’, and the rest was disregarded. In 1983, the oil market dropped significantly, but Exxon Mobil still wanted to make record profits. So they drew the conclusion that someone has to be fired to cut costs: the scientists researching alternative energy. In the space of a year, Exxon Mobil went from attempting to switch to renewable energy, back to contributing to global warming by the bucket load.

In 1985 it was discovered that chlorofluorocarbons, a pollutant, were completely destroying the ozone layer. 2 years later, it made the news. The Montreal Protocol was signed that was designed to stop the deterioration of the ozone layer. This was seen by many, including Rafe Pomerance, who noted that global warming is far more serious of an issue as it can cause far more damage to the world.

In the summer of 1988, it was extremely hot, like no summer they had seen before. Crops were dying, droughts happening left, right, and centre, and climate change was finally taken more seriously, resulting in Congress wanting an immediate hearing to discuss it.

The newly elected president, George H.W. Bush, appeared to be listening to the environmental scientists, as he said: “1988, in a sense, is the year that the Earth spoke back. This summer we’ve seen a lot of talk about the greenhouse effect. As the nations of the world grow, they burn increasing amounts of fossil fuels and that gives off carbon dioxide which acts a blanket insulating the Earth, and thus could contribute to an increase in temperatures in the atmosphere, but we must have a clear commitment to emissions reduction. I will appoint the finest most qualified individuals in the land to serve in the environmental protection agency, they will have my mandate to go after polluters.” This is how close America was to stopping climate change.

Of course, Exxon Mobil was not pleased, as they had spent many years getting rid of their researchers and increasing their profits in oil and gas. So they decided to use some of their expanding wealth to spread misinformation in order to confuse as many people as they could about climate change.

To add to the negativity, President George H. W. Bush hired John Sununu as the chief of Staff. John Sununu had an engineering degree that he felt made him highly knowledgeable on climate change and the environment, so when Dr. James Hansen spoke in a hearing and submitted his testimony, Sununu censored nearly the entire document. In response, Dr.Hansen called Al Gore to state how much of a fool Sununu has made him look by censoring his testimony.

Gore saw the perfect opportunity and instructed Hansen to write this in a letter, which he then passed on to the newspapers where it made the front pages. When Hansen testified, he first read the censored version. Congress was incredibly confused and wanted to know what any of it actually meant, to which Hansen advised them to ask the people that wrote it: the White House. Congress and the media were astonished by what had happened, and finally, in 1989, there was a climate change summit in Noordwijk, Netherlands. 65 countries attended the summit, and the aim was to convince them all to agree to freeze emissions.

George H.W. Bush stuck by his words and made William K Riley the EPA administrator. Riley listened to scientists and saw Exxon Mobil’s disinformation campaign for the atrocity that it was, and was prepared to make a commitment to stopping climate change across the world. Exxon Mobil was not pleased, and their worries were increasing. The chief of staff, John Sununu, was also very nervous about Riley’s behaviour, so he “bumped” Riley, in favour of a science advisor that was skeptical about climate change and was already friendly with Exxon Mobil, alongside several other fossil fuel companies.

Despite this, things were going well at the Climate Summit, until it came to the final day when pro-fossil fuel John Sununu was personally sent to the conference and refused to sign the treaty everyone had been working on and left the conference.

Exxon Mobil and the fossil fuel industry did not stop there either. They started up a fossil fuel special interest group called the Information Council for the Environment that had the aim of spending millions creating advertisements in newspapers and on the radio to push forward information that they knew was fraudulent about the environment and climate change. This is proven by Exxon Mobil’s internal memos stating clearly to “1. Reposition global warming as theory (not fact).”  and to “2. Target print and radio media for maximum effectiveness.”

Today, there are many people trying to get the world to take climate change seriously again, such as Greta Thunberg, Extinction Rebellion, and the Sunrise Movement. Politicians like A.O.C., and proposed legislation like the Green New Deal, make climate change policy appear actually possible. It is paramount that we keep up these efforts and do not allow the fossil fuel industry to smooth over us again. 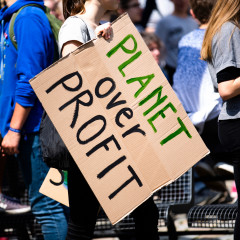 Around 30 years ago, America had the solution to climate change in the palm of their hands, but someone decided to put a spanner in the works.