Heartstopper follows characters Nick Nelson (Kit Connor) and Charlie Spring (Joe Locke) navigating all aspects of teenage life including romantic relationships and sexuality. The new eight-part Netflix smash hit is based on the graphic novel series of the same name by Alice Oseman.

Due to the show's depiction of LGBTQ+ romance in adolescents, many of those within the community are praising its presence and positive but truthful depiction of growing up within the LGBTQ+ community. TV critic Scott Bryan took to Twitter to explain his feelings about Heartstopper: “It is a show I needed 20 years ago. Back then, I looked to television to make me feel valued and seen. This show will do that for so many people right now and as a result, my heart beats with pride”. Within the thread he went on to say “Never underestimate television in how it helps others feel represented and understood. If Heartstopper was out when I was 14, it simply would have made my life better”.

Talking about the positive representation of the show, Heartstopper star Joe Locke told The Guardian “it’s wonderful, because for so long queer people have had to read and listen to stories of which the only thing that happens is hardship. And it’s important we change that narrative – we need queer stories with happiness at the forefront, too. It’s a way to change realities in the real world.”

Whilst the show aims to represent LGBTQ+ life in a positive light, it also tackles prejudice and inequality. Throughout the show we see how Charlie is bullied for his sexual orientation whilst Elle (Yasmin Finley) is moved to another school due to being transgender and we hear how some of her previous teachers refused to accept this.

Self-confessed superfan Linda, expressed to Voice about why she feels this representation is long overdue. “Heartstopper is bright and at times complex but uplifting, bringing together a broad cast of characters who are all in different places in their emotional journeys with their own unique identities. Just as we are in real life!”. They then acknowledged how the representation seeks to normalise LGBTQ+ lives. “Having queer, gay and trans representation on a show that so carefully moves around the gay narrative is brilliant. It normalises our existence and our experience”.

Heartstopper has been a huge success for Netflix, showcasing the demand for LGBTQ+ representation in the media. With a further two series confirmed, its impact can only increase, helping to give the younger generations safe space on their screens. 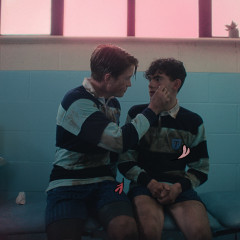