New evidence has emerged on “the extraordinary scale of China’s targeting of Uyghur Muslims and other ethnic minorities”. The “potentially lethal systems of control” used against religious minority groups in West China’s concentration camps have been leaked to the BBC in an enormous cache of secret documents, The Xinjiang Police Files.

The documents are mainly instructions for officers at the camps, however, they include enough information for the BBC to reconstruct a division of the camps that is under the name ‘Shufu County New Vocational Skills Education and Training Centre’. 3,722 students are said to be guarded by almost 400 police officers, many of them armed with sniper rifles and machine guns. The officers also carry shields, batons, and handcuffs, and yards are fenced off under watchtowers.

One of the most shocking paragraphs from the documents outlines protocol in cases of escape attempts. In the event of an escape, an alarm is triggered through the camp, perimeter roads are sealed off and buildings are locked down before the camp's personal armed “Strike group” is sent in. The Strike group fires warning shots and are then ordered “shoot to kill”

Also outlined are the procedures for transfers between camps. Captives are blindfolded, handcuffed, and have their feet shackled. “430 sets of handcuffs, shackles, and hoods are prepared in advance” and “all students being transferred must wear them”. Anyone being led out of camp for medical treatments, while ill, “must be restrained and should be accompanied by 4 escorts”.

Similarities are eminent between the commandments in the documents and leaked footage from a Chinese whistleblower in 2018, and an authenticated photograph attached to the cache.

The Chinese government has been accused of major human rights violations on multiple occasions over the years since 2017, but has vehemently denied the allegations, insisting that the camps are mere “schools” targeting extremism and “students sign up voluntarily”. In 2019 they claimed that nearly all their “students” had “graduated”, however satellite images suggest the camps are still operational or have been relisted as prisons or detention centers to discourage international judgment.

On Tuesday 24 May, foreign secretary Liz Truss released a statement recognising the  “extraordinary scale of China’s targeting of Uyghur Muslims and other ethnic minorities”. The statement mentions the “extensive body of evidence from Chinese government documents, first-hand testimony, satellite imagery and visits by our diplomats to the region.” However, aside from standing “with our international partners in calling out China’s appalling persecution” there doesn't appear to be any plans for action emerging from the UK as of yet. 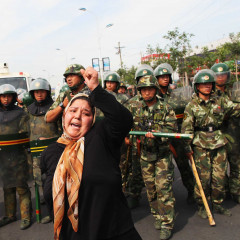