Our thoughts on six of our favourite new releases from the past week, we urge you to give these tracks a listen and let us know what you think!

Radiohead’s Thom Yorke and Johnny Greenwood have teamed up for the first time since the band’s last record, Moon Shaped Pool, after focusing on solo projects for the past couple of years. This time around, the musicians are joining forces with drummer Tom Skinner from the modern jazz outfit Sons of Kemet for their new collaborative project named The Smile. Sonically, the track turns its back on the electronically infused rock that the iconic duo are more recently known for, instead opting for a much more sporadic and aggressive sound akin to their earlier work, and it is as immediate as it is short. The track blisters by in a three-chord punk fashion, with Yorke’s vocal soaring over the top. Although somewhat simplistic on the surface, ‘You Will Never Work In Television Again’ also abstractly weaves in noisily distorted FX on guitar, bringing about a slightly disjointed and wholly abrasive feel. The song is surprising in its presence, and seems to be articulating a heavier, more direct and frustrated headspace of a talented, all-star team-up.

Poet and musician Kae Tempest is known for their unapologetic societal commentary in their work, and in an unlikely collaboration, has teamed up with rapper Kevin Abstract from Brockhampton fame for the track ‘More Pressure’. The song is relatively sparse when it comes to instrumental prevalence, mostly focusing on Tempest’s messaging with a subtle, vintage synth tone and reserved drums pulsating in the background. Tempest highlights the effect that worldwide pressure can have on mental health, and how everyone needs a release valve. The track sounds like a mixture between new wave, hip hop and garage, exerting a sense of frustration but in a way that is calm and thoughtful. Kevin Abstract’s feature is welcomed, and his flow is as melodic as ever, however, there does seem to be a dichotomy between the poignance of his input when compared to that of Tempest’s. Overall, the song is a pleasant, introspective piece that sets a nice tone for the rest of Tempest’s new record, The Line is a Curve, which will also see collaborations with critically acclaimed artists such as Lianne La Havas and Fontaines D.C.’s Grian Chatten.

As a band that has seen overwhelmingly positive critical reception since their inception back in the ‘90s, Spoon releases are often met with high expectations – and they haven’t disappointed here. Spoon have managed to compose a song that scratches a multitude of itches for any fan of an indie or classic rock sound. Instantly, punchy, shuffling drums greet the listener, setting the backbone for an understated folky guitar to build up the track's instrumentation. This guitar soon melds into a heavier tone, invoking a bluesy yet bold classic rock sound. Lead vocalist Britt Daniel brings a powerful and expertly crafted vocal melody to round off the track, with occasional cheeky piano and bass inflections here and there to add extra colour to the song. ‘Wild’ is the epitome of that classic rock sound that many seem to shy away from, and allows for a more fun and positively charged style that is executed well. Spoon definitely exhibit their vast experience, as always, and their new record Lucifer on the Sofa is sure to be one to look out for when it releases in full next month.

Fontaine’s D.C. - Jakie Down The Line

Fontaine’s D.C. are one of Ireland's biggest musical exports. Hailing from Dublin, their unique blend of poetry and post-punk rock has seen them gain major popularity from fans and music critics alike. Routing themselves in their gothic romance age, ‘Jackie Down The Line’ propels itself with jangling guitar sounds and a much softer vocal from Grian Chatten than previous singles, becoming more reminiscent of bands like The Cure. The woozy trance inducing melodies entice the listener to dream in black and white, it feels dark and thrilling as the simple drumbeat flows through and steers this more melodic exploration for the five piece. One thing that hasn't changed is the dark richness of lyricism with lines such as “See her spirit in decline, see the handsome mourners crying, they hawked a beating heart for a sturdy spine”. While one may imagine fans of the band to all be in black and shut away from the world, Jackie Down The Line proves that this brand of self-sympathetic rock is only getting stronger.

Hippo Campus are American stars on the indie music scene, and their blend of synth sounds and romantic melodies make them more than just another pop-rock band. ‘Ride Or Die’ is the perfect antidote to the January blues as each band member's individual talent blends together, creating a comforting summer track that makes the perfect backdrop for long summer nights on the beach. The song takes elements from New York shoegaze and British bedroom indie pop, building a catchy chorus with strong repetitive waves of guitar and drums. The 80s influenced vintage computer sounds help to hold the record together adding another dimension to an already shining pop song about building relationships in different settings.

James Morrison was one of the biggest names in pop in the noughties but now he's back with his signature brand of smooth, romantic love songs. ‘Don't Mess With Love’ details how to deal with relationships – “Don’t push it aside, just to watch it burn”. James’ distinctive velvet vocals with underlying grit wrap around the lyrics like a warm blanket on a winter evening whilst the melodic guitar lines flow through taking the listener by the hand and on a journey of romance, pain and discovery. Whilst the new single isn't sonically different to anything James has done before, with drum patterns and lyrical content staying firmly in the same spot as it did back in 2006, Don't Mess With Love is the perfect relaxing and stress relieving start or end to any day perhaps the familiarity is key to James’ success.

Ash Edmonds and Faith Martin contributed to this post 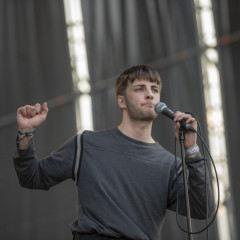 Our thoughts on six of our favourite new releases from the past week, we urge you to give these tracks a listen and let us know what you think!