The reality TV star has come under fire for classist remarks, but her role as Creative Director at PrettyLittleThing has also tied her to allegations of exploitative workplaces in the company’s supply chain.

Love Island’s Molly-Mae Hague has come under fire recently for comments that have been branded as classist and out of touch as she claimed that “we all have the same 24 hours of a day” regardless of background. But as Creative Director at fast fashion brand PrettyLittleThing, it is Hague’s actions as well as comments that are harmful and perpetuating wealth inequality.

Hague’s comments were made in a podcast, Diary of a CEO, released last month, but as a clip resurfaced on social media, many began to take offence at its content. “You’re given one life and it’s down to you what you do with it,” she claimed in the clip. “You can literally go in any direction.

“When I’ve spoken about that in the past, I have been slammed a little bit, with people saying, ‘It’s easy for you to say that, you’ve not grown in poverty, you’ve not grown up with major money struggles, so for you to sit there and say that we all have the same 24 hours in a day, it’s not correct.

“And I’m like, but technically what I’m saying is correct. We do. So I understand that we all have different backgrounds and we’re all raised in different ways and we do have different financial situations, but I do think if you want something enough, you can achieve it.

Many have branded these comments as out of touch and hypocritical, stating that Hague is seemingly ignorant of the inequalities in society that mean that her claims are undeniably untrue. People in particular began to draw focus to Hague’s position as Creative Director at PrettyLittleThing, a clothing company that has come under fire alongside its parent company Boohoo for mistreatment of workers.

The questionable origins of PrettyLittleThing clothes

After her stint on reality TV show Love Island, Hague landed her job as Creative Director at fast fashion company PrettyLittleThing. PLT came under scrutiny on Black Friday of last year after they announced that they were giving away large amounts of clothes for free on their website. People began to question how this was a financially viable option for the company, with climate campaigner Laura Young asking how this could happen “without the exploitation of both workers and the planet?”

In an Instagram post, fast fashion campaigner Venetia La Manna also questioned the ethicality of PLT’s sale, saying, “This 95% polyester (plastic) and 5% elastane (also plastic) ‘slinky shirt’ may be free, but it’s costing the planet… and PLT can’t prove that it wasn’t made in unsafe conditions, using unethical labour,” adding, “Who Made These Clothes? How Much Did You Pay Them?”

She acknowledged that it was important for clothing to be accessible “but by giving it away for free, PLT are implying that their clothing holds no value – which tells us everything we need to know about how they treat their garment makers and our planet. It also shows that they’re vastly over-producing”.

These suspicions of worker exploitation are likely to be proven correct when PLT’s parent company, Boohoo, is taken into account. In July 2020 an undercover reporter from the Sunday Times found that workers in a garment factory in Leicester were being paid as little as £3.50 an hour to produce clothes for Boohoo. The minimum wage at the time for those aged 25 and over was £8.72. The report also found that workers were not wearing masks, putting them at risk of contracting Covid.

Boohoo has seen rapid sales growth, particularly during lockdown, with its bosses in line to receive £150 million bonuses at the time. After the allegations of underpayment aired, Boohoo’s value dropped by £1.1 billion, leaving it at £3.7 billion. Boohoo may have been able to initially increase sales during lockdown as it was later found that several factories in Leicester who allegedly supplied Boohoo stayed in operation despite restrictions. Workers shared that they had been asked to continue working despite Covid outbreaks in the workplace.

The workers’ testimonies were revealed in a report in June 2020 by workers’ rights group Labour Behind the Label (LBL). In response to this, Boohoo announced an independent review in July, the results of which were delivered to the board in September of that year. LBL had announced that there were "lockdown breaches, exploitation, and modern slavery" involved in Boohoo’s supply chain, but the review claimed that no crimes had been committed. However, it did acknowledge that allegations of low pay and poor working conditions were “not merely well-founded but substantially true."

The review found that some workers went without statutory holiday pay, sufficient first aid kits, hygienic bathrooms, and suppliers failed to follow health and safety regulations. Alison Levitt, the senior lawyer who led the review claimed that "Boohoo has simply no idea where its clothes are being made and thus has no chance of monitoring the conditions of the workers who make them".

However, the review itself identified that senior directors at Boohoo had been aware since at least December 2019 of "very serious issues" in the treatment of the factory workers who supplied the company. It stated that the company had “ignored” red flags and "did not move quickly enough".

Following the review Boohoo claimed that they would take measures to address the issues raised by the review and would be working with more suppliers with a "track record of ethical and sustainability policies".

However, in December 2020 it was once more revealed in an investigation by The Guardian that Boohoo had allegedly been mistreating its workers, this time in factories in Faisalabad, Pakistan. Workers at these factories shared that they had been working in unacceptable conditions for as little as 29p an hour.

One of the workers who was interviewed said that “I know we are exploited and paid less than the legal minimum, but we can’t do anything … if I leave the job another person will be ready to replace me.” Workers allegedly also often worked 24 hour shifts in order to fulfil demand created by the Western market.

Footage from the workplaces also shows safety risks such as motorbikes parked indoors next to flammable materials and workers being surrounded by construction work including scaffolding balanced on piles of bricks. Some workers said they did not receive payslips or any receipt of their pay, preventing them from recording their income.

Boohoo once again claimed that it was unaware that it was being supplied by workers under such conditions and that it “will not tolerate any instance of mistreatment or underpayment of garment workers”.

However, as of June 2021, Boohoo were still facing accusations of mistreatment of their workers after Labour Behind the Label, ShareAction, and the Business & Human Rights Resource Centre all stated that Boohoo had not sufficiently improved issues within its supply chain and ensured better conditions for its workers in Leicester.

Boohoo had also continued to fail to recognise unions such as Usdaw, thereby breaking the promise it made in 2018 to the parliamentary Environmental Audit Committee that it would engage with unions in the warehouses that supplied them.

The north-west regional secretary for Usdaw, Mike Aylward, recognised that many would be concerned “after fast-fashion links with garment manufacturers who exploit workers and reportedly paid as little as £3.50 per hour were exposed. Sorting the supply chain is important and the company also promised MPs they would engage with Usdaw, but that is yet to happen.” Usdaw have said this has left workers without a real voice.

Boohoo is one amongst many in its exploitation

Boohoo’s treatment of its workers is arguably symptomatic of fast fashion as a whole. Alison Levitt who had led the 2020 independent review, stated that "growth and profit were prioritized to the extent that the company lost sight of other issues". This is an attitude that is reflected in countless companies’ actions, within fashion and beyond.

Molly-Mae Hague’s comment that “we all have the same 24 hours of the day” is galling to many. But it becomes all the more galling with the knowledge that her 24 hours a day as a high-earning Creative Director are only supported and made possible by 24-hour shifts from underpaid workers in appalling conditions.

This is the reality of not just fast fashion, but capitalism as a whole. Hague’s mentality is not just indicative of ignorance, but of wilful neglect and a lack of empathy. These are the characteristics that are driving capitalism, threatening the human rights of workers across the globe, and pushing the Earth further and further into the climate crisis. 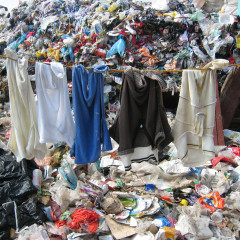 The reality TV star has come under fire for classist remarks, but her role as Creative Director at PrettyLittleThing has also tied her to allegations of exploitative workplaces in the company’s supply chain.