A list of my favourite Christmas-themed episodes from my most favourite sitcoms.

Sitcoms are the background noise to my life. These sitcoms have kept me company in every situation, no matter what I'm doing or what mood I'm in. Since it's the holiday season, I have pulled together a list of my top six favourite Christmas episodes from sitcoms like American Dad, Modern Family, and The Big Bang Theory guaranteed to add extra Christmas joy to your Christmas holiday.

Christmas isn’t all about Santa, you know. Ever wondered who visits those kids on Santa’s naughty list? Yep, that’s Krampus. The anti-Santa and in this episode, Seth Macfarlane and crew are giving Krampus the spotlight. Steve is being a brat and breaks out in song in the middle of a department store because Stan and Francine won’t buy him a toy – he will never grow up. Having trapped Krampus in a clay pot years before, Stan lets him loose to enforce some punishment on Steve. Krampus, voiced by Danny Glover, teaches Steve the real meaning of Christmas and equips him with a healthy dose of respect. This is a lesson all the Steve’s out there could heed before harassing their parents for toys they’ll forget about before Boxing Day hits.

Nope, you read that right. Yippee Ki-Yay is Die Hard, but Yippie Kayak is so much better. For those who don’t know the main character in Brooklyn 99, Jake Peralta, is a Brooklyn detective obsessed with Die Hard – John McClane in particular. So, you can imagine his excitement when he, Charles and Gina get held hostage in a department store on Christmas. Jake is all set to save the day, and the other hostages, when his John McClane moment gets stolen by the loveable but not exactly badass detective, Charles. Charles may have saved the day but botched the famous John McClane catchphrase and replaced it with ‘Yippie-kayak other buckets.’ Typical Charles.

To all the Friends fans out there, please tell me I am not the only one who knows the routine off by heart? Monica and Ross are invited to ‘Dick Clarke’s New Year’s Rock and Eve’ with Joey and Janine, played by supermodel Elle Macpherson. In true Gellar fashion, they want to be the best. So, to improve their chances of being the best, they perform ‘the routine’, a dance – if you can call it that – from their childhood. While the Gellar’s are embarrassing themselves, Joey is striking out with Janine, and the rest of the gang are ransacking Monica’s house looking for the presents she got them because she is too good at gift-giving and wants to get one up on her. What’s more Christmassy than deceit and making a fool of yourself?

I go back and forth with HIMYM. Some days I love it, and some days, I think it’s a ridiculous show that didn’t need to go on for nine years. That being said, ‘How Lily Stole Christmas’ never fails to make me laugh. Having just got back with Marshall after running away to San Francisco, Lily thinks that things are finally back to normal. That is until she hears an old answering machine message Ted left Marshall, urging him to get over her because she’s nothing but c***. Disgusted by what she has heard, Lily makes it her mission to cancel Christmas until Ted apologises, something he refuses to do. Although the more memorable HIMYM holiday episodes are surely ‘Slapsgiving’, this episode involves the dreaded ‘C word’, the threat of cancelling Christmas, and Ted in hot water, which is always fun to watch.

Although Modern Family may have gone downhill in the final three seasons, nothing beats the hilarity of season 3 when the show really hit its stride. In this episode, the family realises that 16 December is the last time before Christmas they are all going to be together again, so Phil suggests they celebrate Christmas then. Of course, nothing goes according to plan as the group pairs off into unlikely couples to try and make the day magical. Gloria runs over the Christmas tree and destroys an ornament Luke fell through the ceiling trying to retrieve. Alex and Mitchell choose the wrong time to defend the gay community whilst buying said Christmas tree, and Manny tasers Phil out of fear that he is about to be kidnapped. Express Christmas was a disaster, but that episode lives rent-free in my mind.

I love this episode because it’s the first confirmation that Sheldon is, in fact, a real boy. When Penny tells Sheldon she has gotten him a present, he feels burdened by the social pressure to return the favour.  He over-thought it, went frantic in a Lush-type store, bought a load of gift baskets, and planned to give her whichever one matched the value of her present to him.  However, Sheldon was not prepared to be presented with the DNA of his hero Leonard Nemoy, rendering everything he bought worthless in comparison. Sheldon now has the chance to create his own Leonard Nemoy, and only one gift could come close to matching that, a hug. Enter one of the sweetest moments in TBBT history where Sheldon hugs someone (other than his mum) for the first time. “It’s a Saturnalia miracle!” 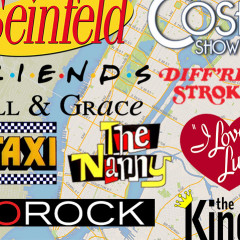 When sitcoms do Christmas

A list of my favourite Christmas-themed episodes from my most favourite sitcoms.