Sonny has been nominated by music teacher Laura Blythe for passing his Grade 3 keyboard exam, not only with distinction but a flawless mark of 100%. “The examiner could not give a reason to mark him down on anything,” says Laura, “and remarked on what a pleasure it was to listen to him perform.”

“Sonny started keyboard lessons with me in September 2016 when he was 11 years old,” she explains. “It became apparent that he not only had a natural gift but was also prepared to work hard. I have never taught a child as focussed as him in every lesson, showing real interest and practising tricky passages relentlessly. His Mum told me he practises every morning before school but has to wait until a 'sociable time' so as not to annoy the neighbours!”

Sonny’s advice to other Trinity students?
“Make sure you listen to the original artist and get into the music, so when it comes to the exam, you’re not just playing to the song but you’re in the song and really feeling it.” 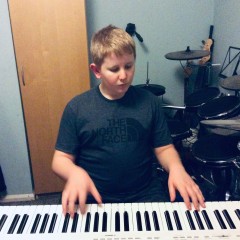