On Sunday, I got the opportunity to review a concert performed by band Bear’s Den in Albert Hall, Manchester. My sister and I arrived early and joined the long queue for a few minutes, enjoying the bubbly atmosphere of the crowds waiting with us. Once inside, the first thing that hit me was the eclectic style of the building. The Albert Hall was originally built as chapel in 1908, but was converted in a music venue in 2014. This gave the space a stunning atmospheric quality, unparalleled to any other venue I had been to before. The walls still had beautiful stained-glass windows cut into them, wooden pew-like benches for seating and the old chapel organ still stood behind the stage. The more modern additions to the venue were simple yet sophisticated; I loved the fairy lights on the edges of all the seats and the electronic menus near the bar. This made me even more excited to see singers perform in the ornate chapel.

The atmosphere was friendly and inviting and we took in the grandness of the venue as people grabbed drinks and chatted to those around them. We listened to the supporting artist for Bear’s Den’s tour, Tusks, a London-based artist and producer. I was mesmerized by her enchanting voice and emotive alt-pop music.

After a short break, Bear’s Den were ready to play. My typical music style leans more towards hip-hop, R&B and pop. The music that Bear’s Den plays falls into the folk-rock genre, which is quite different to what I usually enjoy. It was interesting to listen to a  brand-new genre of music and then see it performed live. By this time, the ground and second floor were completely packed and raring for the band’s performance. I enjoyed every minute of their singing - it was engaging and fun. I liked it when they casually chatted to the audience, as it made the gig feel more personal. My favourite part of the show was when the band asked for all the mics and amps to be turned off and played unplugged. This made the whole show seem more intimate. At one point in the show, the band moved down from the stage and played in the middle of the audience. It was really special to watch hundreds of people fall silent to listen them play. All of these small touches created warm and magical ambience, which I felt enhanced the whole experience.

I am so glad to found my next obsession with Bear’s Den’s music and to have discovered a wonderful new genre of music. I had so much fun watching Bear’s Den live. I wouldn’t mind doing it again! 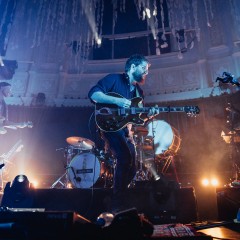