Heathers: The Musical is an explosion of theatrical fun; a gut-wrenching, belly-laughing, shock-rendering, two hour long emotional rollercoaster. Yet its subject matter is outrageously different to those of the light and fluffy musicals which normally dominate the West End. O’Keefe and Murphy’s witty humour underlines the impactful messages about the darkness of humankind, making you cry and gasp in equal measure. The script is refreshingly un-politically correct, but the emphasis placed on the offensive comments teeter them in the direction of being shocking instead of uncomfortable. The production rests firmly in the nostalgic 80s despite its concentration on the more relevant, unchanged themes of society, giving it the transformative aspect of theatre without losing its message.

Not only does Heathers make a mundane high school seem the fantastical place of a storybook, but it also manages to simultaneous drive home the idea that the school is a representation of our troubled society, not merely a result of it. As her dead friends return to haunt the troubled teen, Veronica, the audience is able to examine the human psyche through the surprisingly effective medium of song. The rock rhythms may make your toes tap, but they also stir an anger within you at the state of the modern world. It’s a dichotomy of a production, and yet the effortless performances of the cast tie it together.

The simple set supports the complex themes approached by the script, giving the plot room to develop without the restrictions of naturalistic surroundings. This works with the use of multi-roling and dream sequences, which serves as a hilarious manifestation of Veronica’s guilty conscience. Meanwhile, the lighting takes over the majority of the grunt work of a naturalistic set, allowing the audience to actively delight in suspending their disbelief. Likewise, it manages to breathe new dimensions into clichéd stereotypes. The love interest is a psychopath, the popular girl is a ghost, and almost everyone somehow attempts to commit suicide. It takes true genius to make this production uplifting, but it isn’t pretentious, nor does it pretend to be a lecture on well-being. In fact, that hypocrisy is precisely what the musical condemns. Never before have I felt so exposed by a musical - it made my heart beat to the rhythm of social injustice. 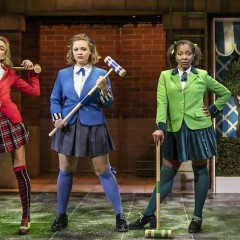