The play was created and written by the students, based on improvisations. The story starts with teenagers having just watched The Greatest Showman at the cinema and are approached by a real Ringmaster, El Fantastico, whose circus is on the brink of shutting down due to lack of quality acts. The friends decide to audition for the circus and succeed, helping El Fantastico to create the greatest show in Somerset. Unfortunately, a group of local protesters attack the circus, almost killing El Fantastico. Luckily, one of the friends steps up to take over his role as the Circus Leader and there is a happy ending. The play ends with a big disco scene which involves the audience.

Everyone learned new skills for the show. These include creating circus performances such as using poi and stage-fighting, telling jokes, and learning new technical skills such as using the lighting desk and creating sound and music to complete the show.

Josh Co as Oddbob the Clown

Josh Ch as the Lighting Director

Ellis J as the Sound Director

Rachel G as the Director 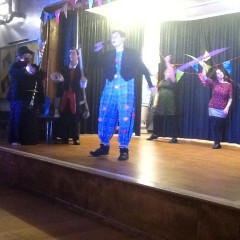 The Greatest Show in Somerset