Tom has been nominated by parent Richard Hughes for passing his Grade 7 drums exam with distinction and his overall exceptional musicianship. “In June,” says Richard, “Tom achieved a score of 98/100 in his Trinity Grade 7 drum kit exam. He was presented with the "Excellence in Percussion" award at the Oxfordshire Country Music Service's gala awards in September. In December he took his Trinity Grade 7 jazz saxophone exam (awaiting result!)”

Tom was named a winner of the BBC Proms Inspire competition for young composers. Following the competition, his composition, "The Weevil'ng" was performed by the Aurora Orchestra at the BBC Radio Theatre in August and broadcast on Radio 3.

He has also played baritone saxophone with the Oxfordshire Youth Dixieland Band in three performances with the Circa Tsuica, a professional French musical circus, and led the percussion section of the Oxfordshire Schools Symphony Orchestra (OSSO) at the Symphony Hall in Birmingham.

In July, Tom led the percussion section of the Oxfordshire Schools Symphony Orchestra (OSSO) at the Symphony Hall in Birmingham as part of the Music for Youth National Festival. He also led the percussion section on OSSO's tour to Poland. In November, he took part in the Oxfordshire County Music Services' massed ensemble at the Music for Youth Proms at the Royal Albert Hall. Around a third of the ensemble were students with special education needs.

Over the year, Tom has taken part in more than 50 live performances in venues ranging from school assemblies and summer fetes to Birmingham Symphony Hall and the Royal Albert Hall. Clips of these performances can be found on Tom's website.

Tom says that preparing for Trinity’s music exams has helped him to develop his understanding of unusual time signatures and strengthen my composing: “For the Grade 7 drum exam I played pieces in 7/8 and 9/8 – this encouraged me to write a piece in 11/8, which won a BBC competition!”

Tom’s advice to other Trinity students?
“Play in as many ensembles and groups as possible,” he says, “including a great variety of musical styles, whether that be jazz, orchestral or rock. Each one will help you to understand how your instrument reacts to others, especially in different styles and settings.” 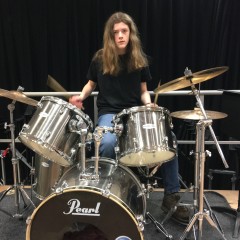